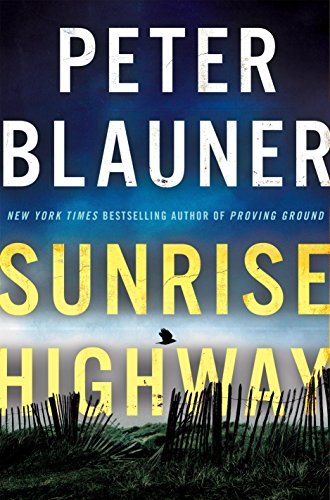 October 2012. A hurricane. A recluse hiding in his home. A pregnant stranger at his door, in desperate need of help. So begins Sunrise Highway, a brilliant novel by Peter Blauner.

The Sunrise Highway of the title runs from Queens across the length of Long Island until it ends just past Southampton. And someone has been murdering women near and around this road for decades.

Sunrise Highway is not a whodunit. Blauner informs his readers of the serial killer’s identity before page 100. This mesmerizing novel is a does-the-person-whodunit-get-away-with-it.

Lourdes Robles, an NYPD detective, is determined to make sure the killer is caught. And she’s also under investigation by the Internal Affairs Bureau for using department resources to search for her missing younger sister.

The events of this story span 40 years, between 1977 and 2017, with nearly every chapter heading informing the reader of the month and year. Blauner, a journalist in addition to being a novelist and also a writer for several television shows including Law & Order: SVU and Blue Bloods, populates his telling with unforgettable characters in an epic battle of good and evil.

The Long Island of this novel is a place of corrupt cops, corrupt politicians, and witnesses who will gladly lie to send innocent people to jail. The web of deceit runs deep, and the connections between the villains reach into the upper echelons of the most powerful of power players. These are people who will not hesitate to slaughter anyone who even gets close to exposing them.

Into this horror show steps Lourdes, a character any reader who appreciates strong, fearless women will add to their list of favorites in short order. This is a woman who doesn’t put up with crap from anyone, not that it often matters in the male-dominated world in which she works. At a meeting, other cops only start listening when a man repeats what she just said. Sheryl Sandberg certainly doesn’t need to remind Lourdes to lean in.

If the heroine of Sunrise Highway is captivating, the serial killer is equally fascinating. He’s the kind of person, thankfully a rare kind, who will provoke a crazed man to commit suicide-by-cop and then marry the man’s widow. When Blauner gives this serial killer rare moments of humanity, it makes the overarching evil of the character all the more grotesque and terrifying.

Blauner shares insights into the worldview of his characters that renders those characters vivid and real. When the serial killer observes that “a bullet could kill you instantly. But shame took its time doing the same thing, and that was worse,” the reader is given a succinct introduction to much of what motivates this sociopath.

Blauner’s prose is classic noir: “He seemed like someone who should have been dead. Or who already was dead but didn’t know it yet.” The tension of this style of storytelling is broken with perfect moments of dark humor. When Lourdes asks her boyfriend if he’s up to having sex again, he responds, “Could we at least take the cuffs off this time?” And in a truly terrifying and wrenching scene, the reader is treated to a moment’s respite when a character’s reaction is described thus: “He looked like someone with a shellfish allergy, realizing he shouldn’t have ordered the shrimp cocktail.”

There are sequences of utter horror in Sunrise Highway. A description of a kidnapped character’s escape from a flooded basement is so detailed, the reader can imagine being there in the rising water with her. Blauner guides readers to inhabit the moments of his characters’ lives, and thus forces his readers to share the characters’ terror and heartbreak. This is visceral writing that is impossible to put down.

Sunrise Highway will inspire many readers to skim upcoming chapters at three in the morning because it’s too late to read much more, but trying to sleep after leaving the fate of favorite characters hanging entirely in the balance is going to be impossible, so at least a hint of what’s about to happen has to be obtained before the lights go out. Chief among these favorite characters has indeed got to be Lourdes Robles, a detective motivated by a painful childhood to bring justice for forgotten victims.