The Sunlight Pilgrims: A Novel 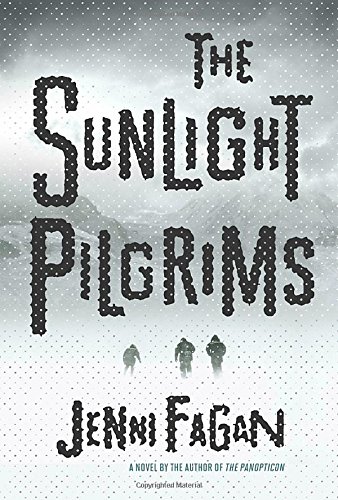 From the margins of society arise a unique cast of characters who take turns narrating the tale in The Sunlight Pilgrims. Set in a caravan park in Clachan Falls, Scotland, the world is coming to the end of days as the temperature plummets and Great Britain faces the coldest winters in over 200 years. There is a coming ice age, and it is set only four years in the future (2020). This is a lovely coming of age story centered around Stella, a transgender girl recently known as Cael, who lives with a survivalist mother, Constance.

Constance is a survivalist in many senses of the word. Not only preparing for the end of days, she is preparing for the end of love with the absence of her husband and abandonment of her lover; however, Dylan strides into her life, fresh from London and the foreclosure of his family’s movie theater. Awkward, tattooed, and bearded, Dylan is grieving for his mother and grandmother and arrives in Clachan Falls to claim his inheritance—a caravan.

Stella’s story is beautiful. Overcoming bullies and the awkward teenage years, she fights for hormone blockers, terrified of becoming male, and the apocalyptic feel of the novel is a fantastic mirror image to Stella’s own turmoil and onset of puberty. The coming ice age isn’t much of a plot in the story so much as a useful comparison of destructive themes to Stella’s story.

While this novel has a young adult feel to it and is presented as coming of age fiction, the narrative itself reads a bit more experimental, and not just from the loss of quotation marks to set dialogue apart from the rest of the text. The terse language used to introduce the damaged and frightful world is choppy and jolting, like a bumpy airplane ride, and it isn’t until readers get to Dylan and begin to understand who he is and what has happened to him that the story takes off.

The descriptions of the settings with its stark language place a reader in the center of the mountains in the frigid coming winter; however, the plot plods in places, and the story is difficult to get into.

Readers who are not fans of fiction that doesn’t read like every day YA fiction will be put off by author Jenni Fagan’s novel. This is a novel not for the faint of literary heart—this is one that tackles a culturally relevant topic with thoughtfulness and lovely prose while simultaneously enmeshing it in a pre-apocalyptic story full of symbolism.

Overall, the story is unique and unsettling in its poetic language, but a bit slow to start. Packed with snow and bravery, this is definitely a title that should be on GBLTQ literary lists. Fans of Margaret Atwood and YA novels will want to read this tale.