The Sun Is God 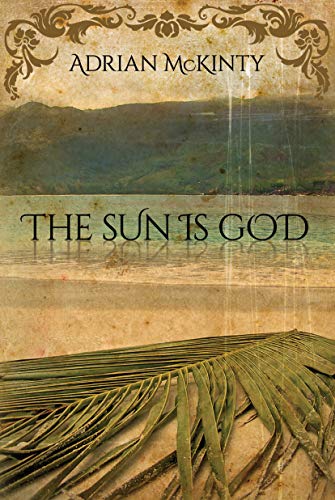 “Adrian McKinty mixes historical figures with fictional characters to create a mystery that reminds the reader of works by both Joseph Conrad and Herman Melville.”

In 1906 New Guinea is a colony of Germany, and a wet, humid, insect-infested series of islands it is, ruled by European plantation owners and officers of the German Colonial Office. Most Europeans who end up in New Guinea are those fleeing either from the law of their own countries, a scandal likely to embarrass their families, or from their own inner demons.

Former British Army Military Police officer Will Prior is fleeing his inner demons. A recipient of the Distinguished Service Metal “For gallantly leading his men in the face of the enemy,” Will knows the truth of his heroic action. He machined down starving and sick native Africans who had been sympathetic to the Boers when they attempted to escape a prisoner of war camp.

Suffering from vivid, recurring nightmares Will deliberately provokes an incident that leads to his being cashiered from the army. “He hated the army and he hated South Africa and every bastard in it. Most of all, he hated himself.”

Now the owner of a debt-ridden plantation in German New Guinea, he lives with a mission-educated, New Guinea girl and drinks too much, but is mostly free of his nightmares. According to the rules of behavior in civilized Europe, Will and his fellow colonists are a drunk, dissolute group.

Will, however, does have his uses to the German governor of the colony, Albert Hahl. Governor Hahl sends Hauptman Klaus Kessler to request Will’s help in investigating the murder of a German national, Max Lutzow, on the remote New Guinea island of Kabalon.

Lutzow was a member of a small back-to-nature group of mostly Germans under the leadership of August Engelhardt. The Cocovores, as the group calls itself, eat nothing but coconuts and bananas, wear no clothes, and spend their days sunbathing while in a heroin-induced supor.

Accompanied by a female English journalist, Miss Bessie Pullen-Burry, foisted on them by Governor Hahl and a powerful and rich plantation owner, Will and Klaus land on Kabalon to a placid and friendly welcome. The Cocovores seem peaceful eccentrics, malnourished and sunburned, but innocent. They insist Lutzow died of malaria, but Will and Kessler know the autopsy showed the cause of death as homicide.

But Will senses that there is something very wrong on Kabalon. Not until a farewell feast given in honor of Miss Pullen-Burry and the two investigators does Will realize what the elusive motive behind Lutzow’s murder is, and how extensive the guilt of those in power.

The Sun Is God is based on an actual murder in German New Guinea in 1906. Adrian McKinty mixes historical figures with fictional characters to create a mystery that reminds the reader of works by both Joseph Conrad and Herman Melville.