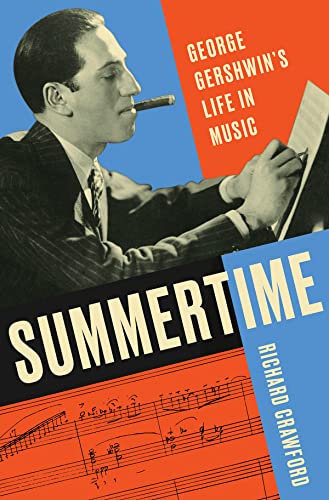 "‘Although his days on earth were limited to the summer season of his life, the music he left behind, endowed with his extraordinary inventiveness and intellectual curiosity has yet to cease thriving as an evergreen gift to the world.’"

"Forever young, fresh and American, his scores convey the assertive spirit and the charged emotions of the Jazz Age, and remain among America's most popular musical exports." (The NPR Listener's Encyclopedia of Classical Music.) George Gershwin (1898–1937), American composer, pianist and songwriter, probably did more for making jazz acceptable to all Americans than anyone else.

Rhapsody in Blue, his first concert work in 1924, had to be orchestrated by another musician because George was still learning his trade as a symphonic composer. However, he performed the piano part of this work from coast to coast. When some years later he travelled to Europe, he discovered that this piece was already known to other famous composers. "The Rhapsody in Blue had won Gershwin more public acclaim than anything he had done before."

George Gershwin was born in New York to a Russian immigrant family without musical antecedents. He had studied the piano for only four years. He left school at age 15 and was hired to plug Tin Pan Alley songs for a music publisher. At age 17, he published his first song: When you Want 'Em, You Can't Get 'Em, When You've Got 'Em, You Don't Want 'Em. Although he never went to college, he wrote many erudite essays extoling the Jazz idiom. When he sat down at the piano, he could keep his listeners enthralled until 2:00 in the morning.

His songs were in great demand by Broadway music publishers and showmen. All along, George studied music theory, counterpoint and, later, orchestration. He signed up to write a piano concerto when he hardly yet knew harmony and counterpoint. The Piano Concerto in F, the only concerto that he wrote, became a musical success.

"Lady Jazz, adorned with her intriguing rhythms, has danced her way around the world, even as far as the Eskimos of the North and the Polynesians of the South Sea Isles. . . . but she has encountered no knight who could lift her to a level that would enable her to be received as a respectable member in musical circles. George Gershwin seems to have at last accomplished this miracle . . . in the classic garb of a concerto."

Gershwin found fame on Broadway and on the London stage through his popular songs. "A lifetime learner, Gershwin was able to appeal to listeners on both sides of the purported popular-classical divide."

After visiting Paris, he wrote his musical impressions of the city with his An American in Paris. Its startling opening began with four honking taxicab horns, signaling the excitement of a stroll down a typical French street. "My purpose is to portray the impression of an American visitor in Paris as he strolls about the city, listens to the various street noises, and absorbs the French atmosphere . . ."

The account of how he composed the American folk opera Porgy and Bess is the most moving part of this book. Several chapters are devoted to this opera, outlining the story, the characters, and some technical details.  "No strategic decision Gershwin made was more important than the one to compose all the opera's music himself . . . The folk expression he fashioned for Porgy and Bess was determined not by its sources but by the character and style that Gershwin decided to impart to it." It became his magnum opus. This opera was originally performed by an all-black cast. Remarkable in that the book was written by Dubose Heyward, a white southern novelist, and the music was composed by Gershwin, a Jewish song writer from New York. Gershwin had travelled to Charleston, South Carolina, to immerse himself in the atmosphere and the music of the African American population.

In his song writing, Gershwin felicitously teamed up with his older brother, Ira, and, together, they magically produced classics for the stage and, later, for Hollywood films. George wrote the music and Ira wrote the words. Some of the Broadway shows: Girl Crazy, Lady Be Good, and Strike Up the Band. From Porgy and Bess, we have Summertime, It Ain't Necessarily So, and Bess You Is My Woman Now.

Gershwin's early song Swanee made him famous. It became Al Jolson's signature song. It "became a marketplace juggernaut . . . it was being played nightly by the leading dance and hotel orchestras, and numerous leaders have described it as the most novel one-step in the repertoire." As of 1931, it became the bestselling song in the country.

His early idol was Jerome Kern. Maurice Ravel, Sergei Rachmaninoff, and Sergei Prokofiev hailed his genius. Ravel wrote: "Here's a musician endowed with the most brilliant, the most captivating, perhaps the most profound qualities: George Gershwin." Two other composers who made their mark in the jazz era were Aaron Copeland and Duke Ellington. But George Gershwin, after a life shorter than Copeland's and Ellington's, was named the foremost maker of American music.

We will never know what great musical achievements still lay ahead of him because his life was cut short by a brain tumor. He died in 1937 at the age of 38. "Although his days on earth were limited to the summer season of his life, the music he left behind, endowed with his extraordinary inventiveness and intellectual curiosity, has yet to cease thriving as an evergreen gift to the world."

The biographer, Richard Crawford, is one of the most distinguished writers of American music history. He compiled this work from the extensive George Gershwin Archives at the Library of Congress and from many scrapbooks and periodicals. For aficionados of American musicals, he has furnished detailed plot summaries as well as technical descriptions of the songs. A monumental work for all who love American music.