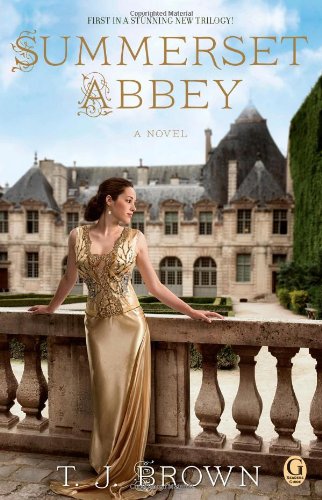 “. . . a solidly entertaining Edwardian novel that will clearly appeal to fans of PBS’s Downton Abbey.”

Sir Phillip Buxton has died, leaving the care of his daughters and their estate to his elder brother, Lord Summerset, until his eldest daughter Rowena comes of age. Younger daughter Victoria is in frail health, dependent upon the daughter of their governess. Prudence Tate has been raised alongside the Buxton girls, and is considered by them to be a sister. Too bad Lord Summerset doesn’t agree.

In the Edwardian saga Summerset Abbey author T. J. Brown endeavors to evoke a world of splendor and deprivation where the upper class are firmly in charge and the lower classes accept their place.

The Buxton girls have been raised outside of society, yet are now required to take their places as nieces of a Lord; by the same token, Prudence Tate must accept that the world that her “sisters” take for granted will never be hers.

All three women are tested as they search for their own identities in a world of manners and intractable social stratification. To make matters more difficult, Victoria and Rowena are expected to make suitable matches, and right quick.

Ms. Brown does an admirable job of recreating a world long past. Period details are lavished richly on each page, giving flesh to the sometimes stuffy interactions between classes.

Her dialogue rings true for the most part though there are a few verbal anachronisms. And her characters are interesting. This is a novel wherein the struggle between upper and lower class is paramount, with the clear decision that the lower class is the more noble; accordingly, Prudence is a good person, through and through, making the right decisions at the right time and ultimately coming to control her own life. Victoria and especially Rowena aren’t quite so lucky. By virtue of their social standing, they are often presented as either helpless or cold.

Lord and Lady Summerset are pure villains, of course. This sort of class distinction is easy to make, but it backfires on Ms. Brown, a bit. Prudence, in her perfect goodness, becomes slightly less interesting than her more layered cousins. Lord and Lady Buxton, though by no means nice people, are fascinating in their nastiness.

There is a mystery, plenty of “lovering,” and an interesting subtext about the roles of women in Edwardian England—it’s not too much to say that by the end there is a sneaking suspicion that Prudence, despite her low birth, is more free than either of the Buxton girls.

Aside from the aforementioned anachronisms, there is a frustrating tendency to indulge in overly gushy details—especially regarding clothing and furnishings. Some might find fault with the abrupt ending as well.

All in all, though, Ms. Brown has written a solidly entertaining Edwardian novel that will clearly appeal to fans of PBS’s Downton Abbey. Summerset Abbey is more realistic in its depictions of relations between the classes at the beginning of the 20th century, but should still please fans both of that show and lovers of historical romance.