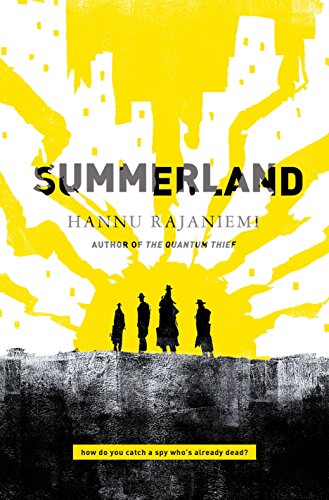 On the cusp of World War II, the paths of two spies continually weave together as they navigate politics, war, spirits, betrayal, and the afterlife in a gaslamp Ghostbusters alternate history.

SIS agent Rachel White begins the story as the primary protagonist, reasonably proficient at her job and about to bring in a major spy. Things go wrong, of course, throwing Rachel under the tired trope of sexism-as-plot element. She loses her job, is forced into a secretarial role, and finds her deep inner motivation to fight the unfairness of the world by bringing down a Soviet mole.

The narrative then shifts to Peter Bloom, the spy. Peter lives a reasonably decent existence in the afterlife working as a double agent. His primary motivation—to join ‘The Presence’ (an artificial god-consciousness)—is often muddled by poorly defined secondary goals of general subterfuge.

Neither Peter nor Rachel are particularly round characters, although both have their tragic gendered backstories (Rachel has suffered a miscarriage and is constantly held back by others due to her gender, Peter’s father isn’t his father and his friend died in college). Where these two really bloom is in interactions with one another, where they manage to rise above tropes and stereotypes to become three-dimensional characters that drive the plot. The most rewarding scenes in the book are the ones where Peter and Rachel interact, whether through lying or true emotional connection, as he attempts to coerce her, and she attempts to deceive him.

Holding true to the fantasy genre, the best character in Summerland is the world. Here, the book truly shines. Death is no longer feared, as various pieces of technology (ectophone, Faraday cages, spirit crowns) allow the living to interact with the dead, and allow the dead to live in a fourth dimensional afterlife—a city built of soulstones of the long dead. The tech words will remind many readers of common-use ghost terms, but the author adds real meat to the technology and the world with in-depth (and beautiful) descriptions of how travel works in four dimensions, how the dead form their bodies, and what comes “after” the afterlife.

The book is built upon political intrigue and 1930s politics, yet it is in these areas that it falls the most flat. It also falls prey to the persistent fantasy ideology that it must hold true to antiquated concepts of gender even while the setting is clearly fantastical and not a reflection of the actual world.

The truest parts of this book, and the parts that will dig into readers, are the parts where the author appears to forget social constraints and floats into the mystic. Never is Summerland more appealing than in the explanations of kata and ana directions, or the use of vim, or the characterization of long-dead mothers still looking out for their grown children from the afterlife.

The deepest part of the plot, the part that is so obfuscated in politics that it only shines at the very end, is the most compelling. Here again the mysticism is brought forward in the possibility of a monster that eats souls in the afterlife and may shatter this dead utopia.

Of equal interest is the spirit armor and the PTSD of the soldiers who wore it—just barely touched on through the trauma of Rachel’s husband, but so intriguing and imaginative that it is a heart wrenching loss not to get to spend more time with it.

It is delightful to spend time in Summerland, to learn about its quirks and rules, and to watch the technology advance and unfold. The moral questions posed are intriguing (“There was no point in climbing if nothing changed when you fell.”) and the endless applications for spirit technology make the book far richer than many others on the market today. The book is held back from true excellence, however, in its inclusion of tired gender tropes and inability to see only the fantastics of mathematics, and not of humans.