A Summer Without Dawn: An Armenian Epic (Interlink World Fiction) 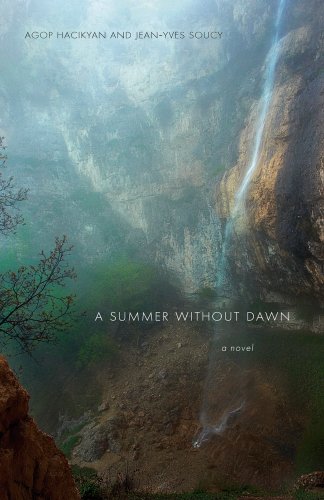 A Summer Without Dawn is an historical fiction novel that describes one of humanity’s darkest times, where cultural values are undermined, blood lines are swiftly severed, and the value of human life is diminished in the name of politics and power. Translated from French to English for its American release in 2010, the novel tells the story of the Armenian genocide of World War I. Though it is rooted in historical fact, its epic message is timeless.

The Ottoman Empire’s political shifts result in instability; its leadership insists that Christian minorities pose a security risk. At this time, Christians and political supporters of past government leaders are enemies, including Vartan Balian and his extended family. Vartan Balian is a talented journalist whose dream is to defend his fellow Armenians through politics and the pen—despite his father’s wish for him to carry on the family pharmaceutical business. His safety is in danger even though he is currently serving the Ottoman Army as a reserve medical officer. Two men, whom he openly opposed, are now the heads of government. The deportations have begun. And this is where the Balian family’s story of survival also begins.

Once the backdrop of World War I is set, and Vartan’s background experience is built, the author artfully connects us with Vartan’s beautiful wife, Maro, and young son, Thomas. The reader knows these people through the small and significant events that are part of their everyday lives. The intricacies of Vartan’s family circle help set the stage. The strength in Vartan and Maro’s marriage is commendable. Vartan knows that it is time to execute an escape plan in order to ensure his family’s safety. On his final evening at home, Vartan is capturedi his hometown, and his plans to escape with his family are thwarted. By all accounts, Vartan is a dead man. Maro and Thomas are deported, with Vartan’s steadfast mother-in-law and his son’s godparents while he awaits his fate, at the mercy of his enemies.

The novel’s title accurately describes the Balian family’s life during the deportation—16 sequential seasons of darkness. Vartan and Maro must use their intellect to survive. Vartan is determined to find his family if he can live long enough to try. Vartan’s son, at one point, faces a heartbreaking lesson in sexuality that contradicts everything he knows about love and marriage. It is a brutal and tragic event because it results in Thomas’s separation from Maro. Can the Balian family be reunited? And if it is reunited, will it ever be the same again?

A Summer Without Dawn is a novel that engages continuously through twists of fate, winding paths, and a series of near-misses. The lines between moral, social, and cultural values become blurred.

Fortunately, for humanity’s sake, there are strong people who risk and sacrifice their lives for what is right. This novel has its share of individuals who do this. Some of them are friends, and others are strangers who share a common goal or a secret connection.

The list of principal characters in the novel is an interesting introduction. It becomes a more valuable reference tool as the novel unfolds because it is indeed populated by so many characters. Each character is sufficiently complex and well-fleshed-out.

Multiple female characters represent contrasting and varied forms of sexuality. However, the most interesting female character, next to protagonist Maro, is Buyuk Hanim. Buyuk Hanim represents the rooted traditions of Muslim culture. She is the protector of Gani Bey’s household. She is strong and confident. She is also wary of the new Christian visitors who have stolen her son’s heart. The reader also sees a flaw in Buyuk Hanim’s character: she has a personal attachment to photographs even though they are forbidden. The reader sees both an unyielding strength and a human weakness in her character, as well as a side of Buyuk that is more flexible—even when cultural differences might dictate a clear and unyielding response.

Both provided maps of the Ottoman Empire are valuable resources for the novel’s historic background. The glossary of Armenian and Turkish words at the back is also quite useful. This eloquently written novel is a must-read for anyone interested in Armenian culture, history, and politics.