A Summer with Montaigne: Notes on a Man Without Prejudice 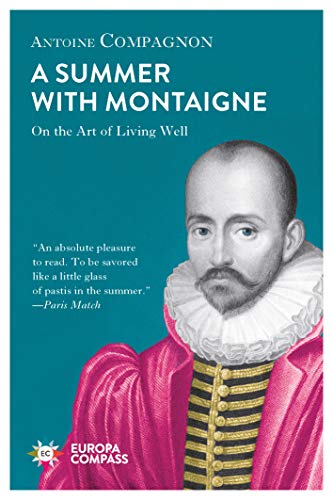 “Rarely has Europe produced anything finer in terms of piercing analysis or moral subtlety. . . . This small book of 40 short chapters brings the man to life and shows his questions, ideas, and solutions to be every bit as relevant as they were in the 16th century.”

The enduring essays of Michel de Montaigne (1533–1592) have been called “a companion for life.” Rarely has Europe produced anything finer in terms of piercing analysis or moral subtlety. For readers unfamiliar with the sage whose writings over 20 years were a catalyst for the French Renaissance, this small book of 40 short chapters brings the man to life and shows his questions, ideas, and solutions to be every bit as relevant as they were in the 16th century.

Antoine Compagnon was asked to host a radio broadcast about Montaigne every weekday over the span of a summer. The Professor of French Literature at the Collège de France in Paris is also the Blanche W. Knopf Professor of French and Comparative Literature at Columbia University. But his is not a dry academic book. In its pages Montaigne comes across as neither a hermit nor a hoary philosopher sheltered from the world. He wrote in the French vernacular of his time, rather than the Latin typical of scholars.

In A Summer with Montaigne, Compagnon invites readers to join him as he strolls through key contributions that probed what is good and worthwhile in life. We are treated to a range of inspired ideas, often with the witty kind of humor that Montaigne himself was known for. These ideas arose naturally from Montaigne’s wide reading and his own experience. We get an up-close seat as Compagnon distills Montaigne’s thinking about war, religion, sex, politics, the nature of power, the power of friendships, and human ridiculousness (especially the ridiculousness of our own shortcomings).

What makes Montaigne particularly human is doubt, especially self doubt. A famous skeptic, he chose as his motto, “What do I know?” (Que sais-je?). Repeatedly, he points out how the world can change in an instant, “and so can I.” He is open and accessible to the ideas of others—“the perfect enlightened gentlemen” who “does not see conversation as a battle to be won.” He was a magistrate, attuned to “the ambiguity of texts,” and so understood that all of them are subject to interpretation and debate.

The Penguin edition of the complete essays runs to 1,270 pages—a doorstop of a book that asks a lot of modern readers. Compagnon’s compendium is hardly the Cliffs Notes, but rather succeeds in distilling major ideas into two or three pages. Montaigne “deliberately portrayed himself as a plain-dealing man of leisure,” but as a magistrate he was deeply engaged in the political affairs of his century.

Take his refreshing attitude on politicians: “If a public figure lies once he’s never believed again; he has chosen the expedient over the long-term, and he has made the wrong decision.” Montaigne mistrusted rhetoric. Reformers, he says, “are like doctors who simply prolong your death while claiming to heal you.”

A fall from a horse, in which Montaigne was rendered unconscious, provided material on which to reflect on death and conclude that it was “nothing much to be afraid of.” Death is a subject upon which he returns repeatedly. Several centuries before Descartes and Freud he mused about subjectivity, identity, and the relationship between mind and body.

Like Aristotle and Socrates who taught and thought on the move, Montaigne was a big believer in walking. Over and over, he returns to the idea that we think best when we are in motion. In spinning out his essays Montaigne was also studying himself, drawing out his own inner nature as well as that of humanity in general.

The power of friendship is remarked upon repeatedly. Explaining why he loved his friend Étienne de la Boétie: “because it was he, because it was I.” It took Montaigne a long time to come up with this remarkable phrase. Montaigne believe that other people enabled him to better examine himself. If he read and cited them, it was because they gave him a deeper understanding of himself. Books were his constant companion, no “better school wherein to model life by incessantly exposing it to the diversity of so many other lives.”

Over the course of 20 years Montaigne revised, amended, and changed his mind—all while steadfastly pursuing ideas that spoke to how one should succeed in the great wide world.