That Summer in Maine: A Novel 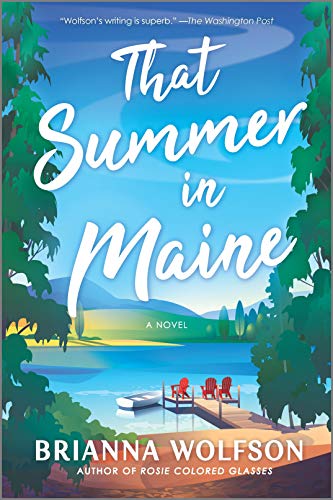 “two generations come to understand each other and find the true meaning of family.”

Most teenage girls experience concerns growing up—Am I pretty enough? How can I be popular? Will boys/girls like me?—and the list goes on. This is the case with Hazel Box, though her anxiety encompasses so much more. For years Hazel has had her single mom Jane to herself and life was close to perfect. Hazel could talk to her mother about anything and receive unconditional love as well as knowing she was number one in Jane's life.

Things changed when Jane meets Cam and they marry. Hazel isn't the focus of her mom's attention, and when Jane gives birth to twin boys, Hazel feels more like an outsider than ever. Where do I belong, she often asks herself?

All Hazel seems to be good for is watching the babies and helping her mom and fading into the background. Jane told Hazel about an ex-lover who is her biological father, but Hazel never considered him. Though she carries his surname, he's never been in her life, so why should she care?

One day Hazel receives an email from the social media site, Wassup? from  Eve Warrington, an unfamiliar girl:

Glancing at Eve's pictures, Hazel is surprised by the similarities between them.  Confused yet excited, she reads as Eve writes about the one-night stand her mother Susie had with Silas Box, who fathered both girls. Susie and her husband Parker desperately wanted a child but were unable to, and on a trip to Maine, Susie encounters Silas, a furniture maker. She loves his work, and they get to talking then go for a drink. Susie over-imbibes, and the rest is history.

Unfortunately—Susie never told Eve that Parker was not her birth father. The ever-precocious Eve, believing something wasn’t right because she did not resemble either of her parents, searched the Internet and found Silas. When she called him and introduced herself, he thought she was Jane's daughter. Eve did not mention she knew about Hazel, and she visited Silas for the summer.

The following spring, Eve contacts Hazel, which piques Hazel's curiosity, especially since she imagines she's doesn't mean much to her mother now.

Eve is planning to go to Maine and insists Hazel join her. With mixed feelings, Jane does not want to lose her daughter to a man she hasn't seen in 16 years, but she seeing how withdrawn Hazel now is, and though it’s against her better judgment, she relents after meeting the Warringtons.

As they leave Susie's home, she hands Jane a journal in which she has recorded her thoughts from last year about Eve meeting her biological dad. She tells Jane her musings helped her through a tough time when Eve was gone.

Overwhelmed with joy, Hazel thinks being with her "real" father will offer her the true family she desires as well as having a sister her age. She is excited when they arrive, taking in Silas's very rustic cabin set in the woods and on the lake and pictures herself living there with him forever. Silas entertains his daughters the best he can but is unsure how to act around young girls. When he offers them beer, she is excited to think he's treating them as adults, though knowing Jane and Cam would be furious.

As the days pass, Jane worries when Hazel does not answer her phone or texts. Is she losing Hazel?

Suddenly, Jane gets a call from Hazel:

"'Hello?' Jane responds, nearly out of breath with relief.'

'She wanted to hear from her daughter so badly.'

"'I'm staying here,' her daughter said into the phone and then hung up."

With this, Jane realizes she must go to Maine to reclaim Hazel.

The girls get along well, though Eve is somewhat of a drama queen, and Hazel, who always longed for a sister, starts to have misgivings about her brash ways. Silas is reticent and melancholy, appearing to be hiding something from them. They are told they are forbidden to enter the locked room in his house, which only makes Hazel more inquisitive. What is the big secret?

One night before going to sleep, Hazel desperate for connection, questions Eve:

"'Eve,' she blurted out into the darkness. "'Are you awake?'

"'Yeah, why?' Eve responded without turning around.'

"'How did you find out about me?' Hazel asked. She could see Eve stirring a bit now.'

"'What do you mean?' Eve replied with much more energy. She sat straight up and turned her lamp on.'

"The glow lit her face up, and Hazel could sense a maniacal twinge in her eye.'

"'Well,' Eve began, slamming her palms onto the sheets nest to her, causing them to ripple.'

"'As you know, I am always one to have all the information. Some people call it gossip but I really prefer to call it information. And there was no way I was going to not find every bit of information about my own father.'

"Hazel nodded along. The feeling resonated.'

"'And in this case, the information wasn't just going to come to find me. My mother gave up his name pretty easily.'

"Eve smiled proudly and flipped her messy bun from one side of her head to the other.'

"'I told her I was sick of her secrets, and she just blurted it right out. So, one day after school, I googled his name. SilasBox.com was the first search result. I literally could not believe it would be this easy and I clicked on the page. The first page was boring. Just a bunch of shitty tables and stuff. But then I found the About Me page.'

"Hazel felt the room get a bit colder and the light of the lamp against Eve's cheek get more dramatic as the story continued.'

"'Silas's pictures popped up right away and there was no doubt that this was him. His green eyes. His black hair. If it's not creepy to say, his good looks. And right there beneath the picture was a whole set of contact information. Email, phone number, address.'

"'I thought calling him would be the easiest first step, so I did. The phone rang a few times and I thought he might not pick up but then I heard his voice on the other end.'

"Hazel was enraptured now. 'Well, what did you say?'

"'Just like that?' Hazel asked with true shock at Eve's straightforwardness.'

"'Yep, just like that. It was quiet on the other end of the line for a moment and then . . . Want to know what he said?'

"Eve was giggling now, her shoulders bouncing up and down.

"'He cleared his throat, and he sounded a bit flustered. 'Uh, right. The other daughter.'

"Eve guffawed as the words left her lips and Hazel's tummy clenched into one big knot. Silas knew about her the whole time? Her father knew about her the whole time? It was almost as if it were all happening all over again. That kick in the stomach, those hot tears pressing behind the eyes, the constriction of the throat that came with learning that the things you thought you knew were not wholly true. She wasn't sure whether to interpret this as a betrayal or not. But Hazel wanted to stay far, far away from that idea. She wanted to push it way, way away. She wanted so badly for this new life to be her permanent one now."

One day at a local fair, Hazel spots two young boys in a double stroller and rushes over to them. In her mind, she sees her brothers, and without thinking, picks one boy up to cuddle. This terrifies their mother, causing Hazel to realize they are not her brothers and she misses her "real" family.

Soon, Eve becomes downright surly and insists she wants to go home. She tells Hazel the only reason she sought Silas out was to make her parents angry after keeping his identity from her for so long. Hazel, now bewildered, starts to think of her own life.

That Summer in Maine is two novels in one; first, the mothers’ histories and the mistakes they made from their past which they now face with their love for their daughters while trying to protect them and keep them close. And the daughters offer their own insights combining their fears, frustrations, and questions about their place in life as they mature. Throughout this, Hazel and Eve see their mothers though not perfect are human and fiercely love them. So as well as adult contemporary fiction, this is also a coming-of-age story as the girls search for meaning. Either way, with the tight and concise prose, two generations come to understand each other and find the true meaning of family.