The Summer That Made Us 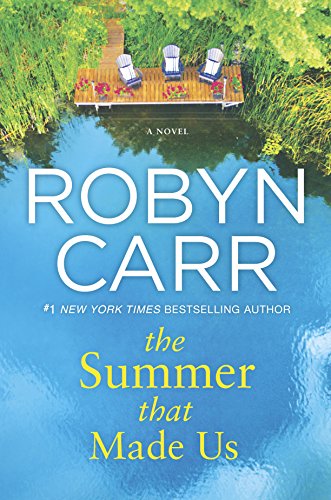 “Something happened here that summer. Something Louise blamed my mom for.”

The Hempstead family has been fractured since the fateful summer of 1989. Sisters Louise and Jo Hempstead, married to brothers and each with three daughters, have a long and lovely experience of summers at their family’s lake house, husbands optional. Lazy summer days of laughter and fun come to a screeching halt, though, when Louise’s youngest child dies in a tragic accident. So begins Robyn Carr’s latest, The Summer that Made Us.

Something had been off that whole summer, though: Jo’s marriage was imploding, Louise’s eldest daughter was having a clandestine affair with a young man across the lake, and there was a dark something brewing between Jo and Louise. Following the death of her child, Louise forbade anyone in the family from visiting the lake house, and the families drifted apart.

Twenty-seven years later, the cousins are having their own crises. One of Louise’s daughters (Meg) is fighting stage four breast cancer; the other (Charley) is having work and relationship problems with her partner of 22 years. Jo’s daughters are arguably worse off: Hope is suffering from mental illness, Krista is recently released from prison, and Beverly is simply absent from the lives of her birth family. Meg decides that only a summer in the home where she was so happy will soothe her pain, so she and Charley open the lake house and invite the various members of the family to revisit this crucial place and summer in all their lives.

The Summer that Made Us is a busy novel, full of complex storylines. Between Louisa, Jo, their daughters, parents, lovers, and children, each page of this book is packed with information. Carr has chosen to tell her tale by jumping back and forth, and sometimes sideways, in time, one minute in 1989 and the next in 2017 (and various dates in between).

Carr’s signature homey dialogue is a welcome support in a sprawling story. She’s a master at keeping her characters in character. Jo is a mother’s mother, with dialogue full of “honey’s” and “sweetie’s,” while Louisa’s cold imperiousness shows through her choice of words. Krista’s post prison bravado spills out when she’s confronted with her snotty sister: “Don’t talk to me in that superior tone of yours or I might lose my temper and deck you”; however, with her mother or potential beau she is down to earth and rather sweet. The snippy retorts and jibes between Charley and Louisa are particularly well done—the strained mother/daughter bond will ring true with many readers.

This is a book jam packed with events: out of wedlock birth, drug use and abuse, domestic violence, cancer, job loss, attempted murder, graft, adoption—even an instance of a child given into permanent foster care because of the parents’ inability to cope with her sense of loss. The Hempsteads are not a family of easy people to know or like, particularly when all that and more is jammed into a mere 330 pages.

Perhaps that is why this novel ultimately falls flat. In order to follow this story, Carr has had to resort to massive info dumps rather than let the story and backstory unfold gradually and naturally. Important conversations, while well-written, are reduced to rapid fire vignettes. Characters are shorthanded in a way that barely falls shy of cardboard cutouts; again, it is Carr’s facility with dialogue that is the saving of the Hempsteads.

With a main cast of seven and an additional at least another ten important supporting characters, the novel is overfilled with drama, leaving the reader missing Carr’s calling card of warmth and realism, and relatable characters. There simply isn’t enough space to let these things grow in a single novel with this much going on. The Summer that Made Us would perhaps have been a stronger story if told in a series of novels about this complex family. If given time to care about each family individually, it might be easier to care about them en masse.

Robyn Carr has a swing and a miss with The Summer that Made Us. With her talent at dialogue and characterization, though, it’s a safe bet that the next one will be hit out of the ball park.