The Summer House: A Novel 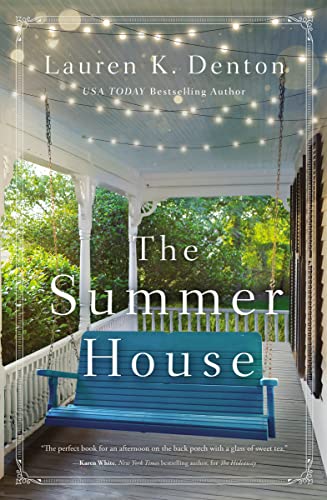 You spend the night cuddling with your husband and wake up the next morning to find him gone having left a note saying, "Lily, I can't do this anymore. You deserve more than what I can give you. Sorry."

Lily Chapman Bishop thought her marriage to Worth was okay—nothing earth-shattering—but how many marriages are? Next to his goodbye letter is an envelope containing divorce papers he already signed.

Lily contemplates: "Then, like a current of cold water pouring over her, a thought rang in her head, clear and sure. It's finally happened. She pressed her palms to the cool surface of the counter and took a deep, trembling breath.

"She realized she'd been waiting for this, probably since the day he slipped a ring on her finger and asked her to marry him. Their union seemed improbable from the very start, but they'd stubbornly defied everyone and clung so tightly to each other, there had been no room between them for doubt, not a sliver of space for any misgiving or hesitation."

Lily wasn't born with a silver spoon in her mouth, or come from wealth as Worth, who with his dealings with Mertha, his dominating and obsessive mother—one who wanted to run their lives—enraged her many times.

The couple recently relocated to Alabama from Atlanta hoping to make a fresh start and be far enough away from Mertha's intrusion. But now Worth is gone, slinking away like a coward and with no definitive justification for leaving.

Reeling from shock, Lily does not know what is in store for her now. She tries to call Worth for an explanation only getting his voice mail, and when she calls Mertha, the woman states with incredulity, "Bishops don't get divorced."

Now, more than ever, Lily feels alone and abandoned, especially missing her deceased mother who died at age 48. Lillian, a hard-working single mother, ran a beauty salon and taught Lilly everything she knew about the business. giving her daughter an unexpected but enjoyable career.

The apartment she and Worth have been residing in is a corporate lease for his newly accepted position--employment Lily later learned Mertha had her hand in—and they had a limited time there before they were to find permanent housing. With Worth gone, from her life and his job, she knows she must find other living arrangements. Should she go back to Atlanta? Mertha offered her a place to stay, though Lily could never be with her soon-to-be-ex mother-in-law. So what happens now?

She would not return to Georgia, and she needs a new home and employment immediately. On a trip to the market, Lily encounters two elderly women who introduce themselves as Tiny and Roberta. They chat and notice Lily looking at Roberta's canvas bag with the logo Sunrise Café printed on it. She asks Lily if she's ever been to the eatery located at the senior community of Safe Harbor Village. Lily admits to being in the area only a short time and not knowing the place. The two older women are like salt and pepper and clash but in a kind and friendly manner that warms Lily's heart.

On her way out of the store, Lily spots a help-wanted flyer for a hairstylist at Safe Harbor Village. She grabs the paper and heads back inside to talk to the ladies. Roberta suggests she call Rose, warning her the woman has "thorns."

Back at the apartment, Lily wonders if this could be the answer to her current predicament. The next day, she meets with Rose Carrigan, who, with her husband, built the development, and she is now the manager. Lily sees a hardness in Rose, wondering what makes her so aloof, but senses her as a kindred spirit. Could Rose have been hurt in the past and erected this wall around herself?

When Rose hires Lily, she is thrilled to learn she is also offered the small apartment above the beauty shop, satisfying her problems of making an income and finding a place to live.

Rose's nephew, Rawlins Willett, and his friend Canaan move Lily's meager belongings into the cottage, and she takes a few days to clean up the salon and settle in. Rawlins, in his early thirties and a shrimper, lives close to Safe Haven, often helping his aunt with different duties around the complex.

Only in her late twenties, Lily wonders how she'll be accepted at the village, but finds herself enveloped by the welcoming arms of the residents, especially the women who are eager for a stylist.

Soon Lily is ingratiated into the social life, though they understand she would probably be happier among folks her own age. She is befriended by Rawlins and his charming daughter Hazel. The child is gregarious and connects with Lily immediately. Hazel fiercely loves her dad and wants to be with him permanently and not be shuffled between him and her mom, and Lily enjoys spending time with both her and Rawlins, making her question if she'll ever have a happy family life.

As time passes Lily muses: "The truth was, the village was beginning to feel like a new sort of home to her. She'd come to appreciate the neighbors' various personalities and quirks, the laughter that floated across the street from the café, the way the afternoon light slanted in through the salon's big front window. She loved the trees and the seagulls, the pervasive sea breeze, and scent of coconut oil. The ebb and flow of life on this postage-stamp spot on the coast had both charmed and accepted her."

She also realizes: "These people had cares—happiness and grief, pain and pleasure—that  rivaled, probably even surpassed what she'd experienced in her brief decades of life."

Lily believes she was sent to the village for a reason. Getting through Rose's tough façade, Lily learns about her sorry past, now sharing a somewhat similar bond.

The author's description of this idyllic community makes the reader want to pack up and move there. Given the semi-tropical climate and the affection the residents have for each other—even the prickly ones are cared for—this setting seems like a paradise. Empathy and understanding prevail as differing generations connect to make a satisfying and enjoyable read.