The Summer Festival is Murder 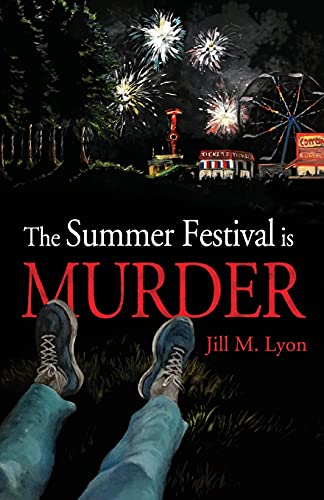 “Take my word for it: if you don’t live in a small town now, you probably shouldn’t move to one. . . . Resist these impulses. Trust me. Miss Marple was right: All the evil of the world can be found in the average country village.”

Felice Bowes and David Titus, her husband, moved from Washington, DC, to Sheffield, Oregon, a small town near the coast of Oregon. Felice narrates the story of Sheffield’s Summer Festival, a usually grand weekend attracting many outsiders and all the townspeople, featuring logging events and a huge fireworks display. Just days before the festival is to begin, Mayor Greta Sutton throws a spanner in the festival committee’s work by suggesting the town should receive some of the gate, the visitors’ attendance fees. In addition, the mayor is known for wanting everything in town going her way and ignoring comments and advice from others.

While attending the festival with her husband, David, Felice overhears a number of conversations, affirming her own dislike of the mayor as being a busybody, controller, and narcissist. These conversations include Greta herself, the City Manager Dwight Orkman, several city council members, and a local real estate developer. Felice also notes several other festival-goers, including Greta’s husband and the musicians.

Murder most foul occurs during the fireworks, and the victim is the mayor: Greta Sutton. She is found in a field of the festival. It is clear it is murder from the outset. The local sheriff, Tom Abhay, interviews everyone who might have knowledge of the murder, including Felice, who could be considered a suspect herself. Felice describes all she saw and heard and after a day or two, the sheriff again contacts Felice and asks for her help to follow up with some interviews because he is short-handed.

Then, another murder occurs in a city office. Felice’s participation in the investigation is getting risky. The sheriff asks her to stop, but she continues, confronting several people she considers possible suspects.

Murders related to the most important town festival reverberate in many ways: suspicion abounds, other festivals are called off, local businesses suffer. One of Felice’s main concerns is how the deaths will affect the future of Sheffield, her adopted hometown. She and her husband have settled into Sheffield, but not everyone in town appreciates their presence as former city-dwellers.

The author does a superb job in describing Oregon weather and small-town dwellers and politics. One or two people can often upset the best-laid plans of local committees and functions.

Most of the characters in town are well-developed, especially Felice, David, and the sheriff. Felice takes risks and is blunt in her approaches to others, another risk. City council members display unique aspects, reflecting the variety of denizens in a small town. The plot lags somewhat and relies on an outsider’s comment to push the story along. The denouement rests on somewhat thin underpinnings. Still, the ending satisfies the reader. More stories about Sheffield, Oregon and its residents should be welcomed.

Julie Weston is a multiple award-winning author of fiction, memoir, creative nonfiction, and essays. Her most recent mystery book is Moonscape, winner of a 2019 Foreword Indie Bronze Medal for Mystery. In 2020, she collaborated with photographer Gerry Morrison for The Magical Universe of the Ancients: A Desert Journal, a travel memoir of the Four Corners area of the Southwest.