The Summer of Ellen 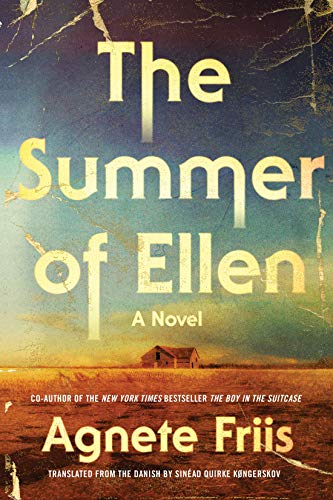 Her previous book, What My Body Remembers, was a moody, deeply interior work of suspense about a woman exploring a traumatic incident from her past.

The Summer of Ellen flips to a male protagonist and plays a new riff on this same theme, though the new entry from Friis more explicitly bounces back and forth from 1978 to present day. (Only the 1978 seconds are marked as such.)

The other similar feature of both novels is the powerful sense of place. In What My Body Remembers, the windy seaside added to the harsh mood. In The Summer of Ellen, it’s the grit and earthiness of life around a farm and nearby forests and fields. Friis doesn’t miss a chance to detail the soil conditions, the vegetation, the birds, the farm animals, the treetops, the breeze.

Ellen appears first as Jacob is digging up potatoes at the farm, the year before he starts high school.

“She was darker than most people I knew. Blue eyes that seemed lined with black, but probably weren’t. The rest of her didn’t suit makeup. Her dark brown hair hung loosely, falling almost to her waist. Long, floppy trousers and an old man’s button-down. Her suntanned feet were stuck into a pair of open-backed wooden clogs. Her feet were dirty, as if she usually walked barefoot. On her fine collarbone hung white mother-of-pearl mussel shell on a leather cord.”

Ellen is from the nearby commune, “one of the hippies.” Jacob tells Ellen he wants to become an architect one day and she instantly dubs him “Utzon,” after the famous Danish architect Jorn Utzon, whom Jacob reveres.

The now-and-then approach adds to the moody vibe as Jacob is called back to the quiet village of Brugsen by Anton, one of his two father’s uncles, who wants to find out whatever became of Ellen.

Jacob is in the middle of a testy divorce with his wife and could use the break—both from Kristen and city life. “The silence was deafening. Like I’d been placed in the set of an empty village. Cars appeared now and then on the main street, but there was no sign of life for as far as I could see up and down Stationsvej. The only things moving were the half-withered flowers in the stone pots outside Brugsen, where hot gusts of wind tore the dull pink petals in all directions.”

Jacob acknowledges what the reader does—his brain is trying to “cut and paste old and new pictures together” as he goes back to the bleak town, seeing trouble even in the foliage. “A silent vengeful nature was slowly enveloping the house in withering vegetation.”

The Summer of Ellen is a novel first and an erstwhile mystery second. There is a dead body, and it turns up in shocking fashion, partly because Friis has us covering our eyes and looking away during an otherwise bloody scene involving regular life on the farm. The body turns up in the 1978 sections and there are police, but they aren’t the drivers of the story.

In fact, there isn’t much driving the story. In 1978, Jacob helps Ellen get away from a boyfriend on the commune who might be beating her. Ellen moves into the same house where Jacob is staying and one night wakes him up to come with her to the commune to retrieve some personal belongings. It’s a trip that proves dangerous but also gives Jacob him a chance to be around this inscrutable female. He is fixated on her breasts and, well, it’s worth getting throttled and worth the resulting headache, too. The next morning, Ellen and “Utzon” are killing chickens together at the farm. And Utzon’s fascination grows. “There was a slight hoarseness in that laugh that I knew and could replay in my head. Just like the guitar solo from ‘Stairway to Heaven.’ I had her inside me.”

The problem is focus. The back-and-forth switching around diffuses what little propulsion there might be to finding Ellen, and it’s hard to get in Jacob’s corner because he broods and muses about that lost summer way back when.

Architects may not own a private eye streak, but between the heavy memories and all that atmosphere, Jacob’s sense of drive to answer questions about the fate of Ellen never shift out of low gear.