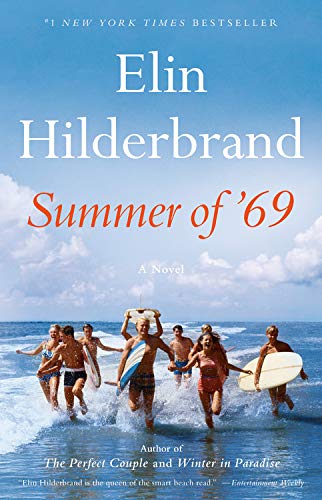 Baby boomers and lovers of the Massachusetts islands of Martha's Vineyard and Nantucket can reminisce over the year of 1969 when the younger generation was feeling their oats through free love, Woodstock, and the harsh realities of the Vietnam War.

It is June 1969. We are first introduced to 19-year-old Richard aka "Tiger" Foley when he receives a letter from the Selective Service notifying him he is called to serve in the army. His mother Kate is beside herself with worry. Why couldn't he have continued his education so maybe the war would be over when he finished and he would not have to go? How can the government take her baby; her only son?

Kate's first husband, Lieutenant Wilder Foley, had served along the 38th parallel in Korea; when he came home he was never right and shot himself in the head, leaving Kate a single mom to Blair, Kirby, and Tiger who were very young. After his passing Kate hired attorney David Levin to convince the court Wilder's death was an accident. Six months after the case settled, she married David, and they later had a daughter they named Jessie.

This enchanting novel revolves around the Nichols, Foley, and Levin families. Kate takes Tiger from their Brookline home to South Boston to be indoctrinated into the military while her girls prepare to head to the islands for three months.

Kate's mother and matriarch, Exalta Nichols, owns property on Nantucket where they spend every summer, with David coming on the weekends. This year, oldest daughter Blair, wed to MIT Professor Angus Whalen who is currently engaged as an astrophysicist for NASA's Apollo 11 Space Project, is thrilled to be coupled with such an intelligent man. She completed her degree in Literature and is looking forward to attending graduate school after the wedding. However, Angus wants her to be a stay-at-home wife, which she consents to, but soon turns resentful. When she becomes pregnant with twins, Angus demonstrates a greater need for her to remain home though he works long hours, and she is bored and lonely. Before long, misunderstandings occur, and Blair leaves Boston for Nantucket to be with her mom and deliver her babies there.

Kirby, the middle-aged daughter, is reeling from a broken romance and does not want to go to her grandmother's house. Finishing her sophomore year at Simmons College she decides to head to Martha's Vineyard to live in a boarding house with other girls and work at a local inn. Kirby is the rebellious one who has her own ideas about civil rights, politics, and life. She befriends Darren Frazier, a young black man, and they share an attraction, which is still taboo in many places. Then upon meeting his mother, she realizes they have met before, though not under good circumstances, and she also knows her grandmother would condemn her having any association with Darren.

Jessie turns 13 the day she and Kate head to Nantucket, and she dreads going. Her straight-laced grandmother will insist on her taking tennis lessons at her stodgy club, which she does not want to do, and without her sisters or Tiger to commiserate with, she will be miserable.

Exalta is an old-time Brahmin, bred to gentility and good manners. She does not understand the changes happening in the late sixties and insists on complete decorum from her daughter and grandchildren. Though she likes her "cup of tea," she is disheartened with Kate who over imbibes while hoping to assuage her anxiety over Tiger.

While the reader is privy to the lives of three generations of women,  Jessie is the one showcased the most as she comes of age. Bewildered and embarrassed, she deals with her first teenage crush, reaching puberty, the horror of her tennis instructor trying to take liberties with her, and her shoplifting fiascos.

Exalta gives Jessie an heirloom necklace for her birthday that she received from her husband back in 1919, and she was told it was only for special occasions. When Kate brings Jessie out to celebrate—only the two of them—Jessie pilfers the jewelry from where Exalta has it for safekeeping. Because it was given to her as a gift, it isn't stealing, is it? She's not allowed in her grandmother's room, so she feels somewhat guilty but shrugs it off. Then, to her shock, Jessie loses it. How can she explain this to her grandmother? Later she confesses:

"'I lost your necklace,' Jessie says. 'The one Gramps gave you for your anniversary.'

"Exalta blinks, and this split second, while Exalts is processing what Jessie just said is the worst moment of Jessie's life.

"The silence that follows is equally awful. Jessie sees no choice but to fill it. 'I took the necklace from your room. I wore it to dinner with Mom last Thursday.'

Exalta executes a nod so slight Jessie wonders if she has imagined it, but it's followed by a change in Exalta's expression. The corners of her mouth fall a fraction of an inch. She isn't frantic at the news or appalled. She is simply disappointed. Jessie has revealed herself to be as untrustworthy as Exalta feared. Not worthy of the necklace. Not worthy of the family.'

"'You took it without asking,' Exalta says. 'Do you know what that's called, Jessica?'

As the world is changing so quickly, Jessie tries to find her place in her life and in her family which now suddenly is becoming dysfunctional. She thinks:

"The experiences of this summer will become as much a part of her as her bones and muscle, her brains, and heart. Ten or twenty years from now, when she looks back on the summer of 1969, she will think: That was the summer I became real. My own real person."

Jessie's one solace comes from the few letters Tiger writes to her. Though they are step-siblings—a term their mother refuses to use stating they are true siblings—they are extremely close, and his absence pains her almost as much as it does her mother.

Each well-fleshed-out character holds on to their own personal secrets while trying to discover their separate path to follow. More than a beach read, Summer of '69 delves deep into history while painting descriptive and poignant pictures of Martha's Vineyard, Nantucket, its upper-class residents, and coming of age in a nation in turmoil.