The Sum of All Kisses 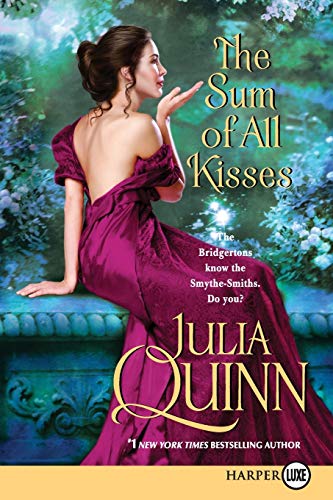 The Sum of All Kisses tells the story of Hugh Prentice and Sarah Pleinsworth, two people who have traveled in the same circles for years and have nothing but disdain for each other.

Years later, when Sarah and Hugh meet they don't even try to hide their dislike for each other.

"Hugh had always been a solitary soul, and there were very few people whose company he deliberately sought. But at the same time, there weren't many people he avoided, either.

His father, of course.

Hugh is a brilliant mathematician who has a ruined leg as a result of this very brilliance; he never lost at cards due to his knack with numbers. The one night he does, he challenges the winner—and his friend— Daniel to a duel. Hugh is accidentally shot in the leg, resulting in months of recovery and severe pain that is now his constant companion.

This duel sets the stage for the entire book as Sarah's cousin was the man who shot Hugh in the leg, which delayed Sarah's first season, thereby leaving her unbetrothed. Sarah is now very focused on finding a husband, and much to her dismay is forced to attend wedding after wedding but never her own.

As a way of reconciliation between Hugh and Daniel's families, Hugh is asked to attend these same weddings. He does so grudgingly, but he loves Daniel and wants to make things right between them and their families.

These weddings and a bit of family meddling throw Hugh and Sarah together time and time again. What begins as a contentious relationship soon turns into understanding, growing into an affection neither one of them can deny.

What Hugh really loses in the duel isn't partial use of his leg—it's his sense of self worth. He feels responsible for the duel and its aftermath and doesn't consider himself a whole man. Indeed, he feels like he deserves to live in misery for the pain he's caused.

"Forget riding, forget dancing, and hunting, and all those things he mourned since a bullet had mangled his thigh. None of those seemed to matter anymore.

He would never gather a woman in his arms and carry her away.

He had never felt like less of a man."

While Hugh feels like his injury defines him as a person and a man, Sarah barely seems to notice except for when it's causing him some distress and she feels compelled to try to ease the pain in some way.

The dialogue is snappy and smart and the characters—and their affection for each other—grow at a believable pace.

The Sum of All Kisses is the third book in a series but can stand on its own. Yet some of the background information, specifically about a certain musical quartet, can feel unnecessary and misplaced.

Unfortunately, the final conflict involving Hugh's father, a suicide contract, and someone being tied to a bed, is both convoluted and implausible; but somehow this doesn't detract from the overall enjoyment of the book.

All in all, a satisfactory—if somewhat unsurprising—entry in the historical romance genre.