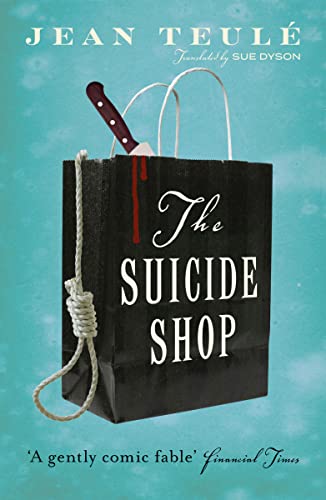 Jean Teulé is an illustrator, filmmaker, television presenter, and prize-winning author of ten books including one based on the life of Verlaine. The Suicide Shop was originally published in French and has been translated by Sue Dyson.

The family is preoccupied with death, and their store motto, written on their shop’s bags, is HAS YOUR LIFE BEEN A FAILURE? LET’S MAKE YOUR DEATH A SUCCESS!

Madame Tuvache makes specialty poisons while her husband Mishima is patriarch of store and family. They have two children, Vincent and Marilyn—named after famous successful suicides—who participate in the gloomy business and each suffer from their own psychological distresses.

And there is the third child, the oddity of the family, Alan, who is cheerful and bubbly and ruins the gloomy atmosphere, sabotaging the business by replacing the poisonous apples with healthy ones and blunting the sharpened razors.

The world in which the story takes place is a bit post-apocalyptic, with ruined ozone and frequent acid rain and pigeons that die if they fly over certain areas in the city. There is advanced technology like 3-D television wherein the newscaster is right there with you—you can even touch her if you like or feel her skirt.

This different world brings in different characters—the everyday person who is looking to commit suicide and asks advice from Mishima and Madame Tuvache over which method to select. The whole world is like an Addams Family cartoon, except for Alan.

And this world and these people are very real that it doesn’t seem a bit out of place that children, who are legally required a chance at life, should be offered candy—it might be poisonous or it might be just sugar—or physical education instructors will be sold a seppuku set.

Alan cheerfully sabotages his family’s attempt at promoting suicide, and one by one they are grateful for it, in time. Marilyn, who believes she has been injected with a poison that will turn her saliva lethal to those who kiss her, becomes depressed when she realizes she will never be able to kiss the boy she loves.

Vincent, who suffers terrible migraines and nightmares, learns to channel his dark emotions into artwork that lessens his pain. Madame Tuvache discovers her knack for culinary prowess beyond poison, and Mishima Tuvache has a mental breakdown when he feels his entire family has betrayed him by embracing Alan’s positive thinking.

Sue Dyson does a marvelous job as translator, losing none of Mr. Teulé’s quirkiness, and Mr. Teulé is a fantastic author that fans of the old Addams Family cartoons and shows will enjoy—as will admirers of Edward Gorey and The Bunny Suicide series.

The Suicide Shop is a fantastic novel. It is lighthearted and darkly comedic at the same time. While the ending won’t really surprise the reader, it is clear that Alan is very much the Tuvaches’ child after all. This is an absolutely delightful and quirky book.