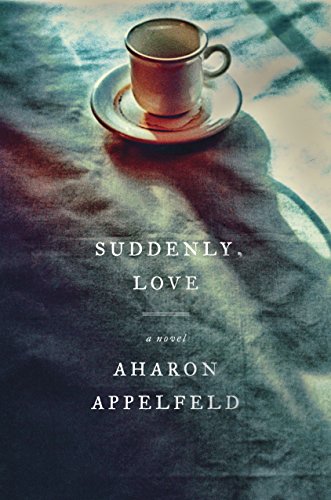 “Though not Appelfeld’s best work, Suddenly, Love despite its deceptive simplicity offers much food for thought and would be a good choice for book groups.”

Among Israel’s leading novelists Aharon Appelfeld (whose previous two novels are also reviewed on NYJB) is perhaps the least Israeli. The focus of his fiction is usually not contemporary Israel but rather European Jewry before and after the Holocaust.

Though his new novel Suddenly, Love (Pitom Ahava in the original Hebrew) is set in 1980s Jerusalem, its two characters are a survivor and a child of survivors. Ernst is a former Red Army officer whose parents, first wife, and daughter were murdered in the Shoah, and Irena is a daughter of former concentration camp inmates who was born in a displaced persons camp shortly after the war. Like their author, Ernst and Irena’s parents are natives of Czernowitz, which between the wars was part of Romania and now is in western Ukraine.

Since Ernst’s unspecified surgery two years earlier Irena has been his homecare attendant who keeps house and cooks his meals from breakfast to supper. He is highly educated and a rationalist in his early 70s, and she is 36, has a tenth-grade education, and is religiously traditional and deeply spiritual; both are native German speakers.

Ernst is also a retired investment advisor who is trying to become a writer (and since he arrived in Israel as an adult he writes in German). This plot element is reminiscent of Israeli-American novelist Tsipi Keller’s character Marcus in The Prophet of Tenth Street (published in Hebrew in Israel in 1995 and in English in New York in 2012) who is also a retired businessman trying to become a writer. But where Marcus admires and seeks to emulate the sophisticated prose of such writers as William Gaddis and Georges Perec, Ernst dislikes the elegant style of S. Y. Agnon, Israel’s only Nobel laureate in literature, and instead aspires to write simple direct prose (like his creator Appelfeld).

For the first two thirds of Suddenly, Love the third-person narration is so simple it feels dumbed down, as if it were written for someone as uneducated as Irena. And yet Irena, whose parents refused to talk about their wartime experiences, is an avid reader of Holocaust literature including Anne Frank, Primo Levi, and lesser-known writers.

Although at the outset Ernst and Irena appear to be opposites, over the course of the novel an affection develops as they help each other work through psychological issues: he was estranged from his parents when they died and feels remorse for persecuting fellow Jews like them before the war as a Communist party activist, while she is overly attached to her deceased parents—in whose apartment she still lives—and has no other friends or relationships.

Seeing Ernst work at his typewriter and then rip up what he’s written upsets Irena. The cause of his block and his depression is the remorse mentioned above, and Irena wishes he could reconnect with his dead parents the way she feels connected to hers.

Ernst’s breakthrough, which comes when his writing recounts childhood summers spent with his religiously observant peasant grandparents in the Carpathian Mountains, unfortunately coincides with the return of his cancer, which this time has metastasized and is untreatable, thus limiting the time he has left to write.

The final third of the novel includes extensive excerpts of Ernst’s prose recollections of his grandparents, and these provide the strongest writing in the book. This psychological breakthrough endears him to Irena who moves in with him so she can care for him around the clock.

By focusing on Ernst, his needs, and her growing affection for him, Irena finds her attachment to her parents diminishes, and she begins to develop a separate adult identity. While there are physical expressions of affection, the love that develops between the two seems less eros than agápe, in contrast, say, with Coleman Silk and Faunia Farley’s lust driven July/November relationship between an intellectual and an illiterate in Philip Roth’s The Human Stain.

The novel also invites allegorical readings: Does Ernst’s idealization of his grandparents’ bucolic agrarian religiously Orthodox diaspora lifestyle imply a criticism of contemporary secular urban/suburban Israel? Is Appelfeld implying an analogy between Ernst’s pre-war Communist anti-Semitism and the anti-religious outlook of Israel’s secular socialist founders? Is this a literary plea for a healing of the secular-religious rift in Israeli society?

Readers will have to decide for themselves. Also indicative of a backward looking perspective is the unquestioning acceptance of normative gender roles.

Though not Appelfeld’s best work, Suddenly, Love despite its deceptive simplicity offers much food for thought and would be a good choice for book groups.