Such Good Girls: The Journey of the Holocaust's Hidden Child Survivors 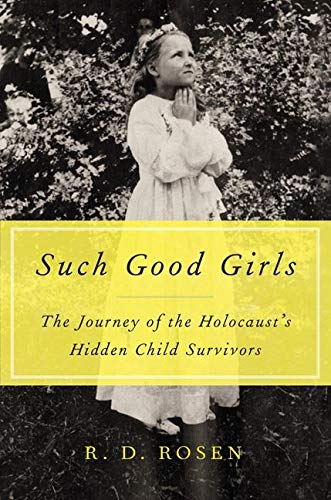 “. . . unfortunately, those stories are nowhere near finished.”

The strong showing of neo-fascist parties in the most recent European elections has added urgency to a long-time concern: What will happen when the last direct witnesses to the Holocaust are dead? Will it become harder to prove that these horrors really happened?

Most of the last living witnesses, of course, are European Jewish children—hidden in cellars and convents, adopted by Christian families, smuggled out of ghettoes, desperately tossed from transport trains. Thus, R. D. Rosen provides an important public service in telling several of their stories, despite the flaws in his new book Such Good Girls: The Journey of the Holocaust’s Hidden Child Survivors.

The first half of the book is inevitably stronger and more compelling, because it contains the narratives of three “good girls” from Poland, France, and the Netherlands, whom the author interviewed decades later in the U.S.

Thanks to fake ID papers, bribes, and Laura’s fluency in German, the mother and five-year-old daughter were able to escape the Lvov ghetto in 1942. For the next three years, they scrambled for jobs and safe housing, barely avoiding capture several times. Laura ended up working as a bookkeeper and translator for an SS officer near Krakow.

But the price was to wipe out all traces of Selma’s memories and identity. She became a little Catholic girl, Zofia, who played board games like “Jews Out” and was taught that “the Jews killed Christ and they kill Christian children for their blood.”

In the second part of the book, unfortunately, Mr. Rosen largely abandons the personal stories to dip in and out of various general themes, including survivor guilt, changing American attitudes toward the Holocaust, modern Polish anti-Semitism, sexual abuse of hidden children, and the divided religious identity of Jews who became Catholic priests. While it’s important to put the children’s narratives into a broader context, the author sprinkles too many topics without enough discussion of any of them.

Meanwhile, Such Good Girls glosses too quickly over one crucial turning point in the narratives: Zofia-Sophie’s reaction to the shocking news, at age 11, that she herself was one of those despised, “Christ-killing” Jews. Rosen appropriately devotes about three pages to the conversation where Laura first tells her daughter, but then he skips blandly ahead:

“For several days, Zofia was inconsolable.” Luckily she soon sat down to a Passover seder, where “she wasn’t about to pass up [Great Aunt] Rosa’s excellent brisket and potato kugel.”

No doubt the adult Sophie was reluctant to talk, and the author didn’t want to press his elderly interview subject on such a delicate topic. That’s understandable but a shame.

An honest account of how Sophie felt and ultimately adjusted would have not only made a stronger book, it also could have provided important advice, comfort, and insights to many other child survivors from all sorts of tragedies. And unfortunately, those stories are nowhere near finished.