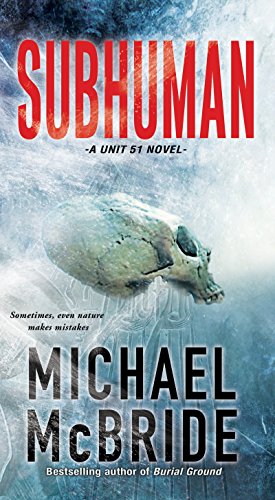 “rises above the usual primary series entry in its depiction not only of the authenticity of its characters but also in the scientific basis of its plot . . .”

A group of disparate people arrive in Antarctica.

They’ve been brought together by Hollis Richards, a man about to realize a lifelong dream. The pursuit of the supernatural by Hitler during the last years of World War II was well known and documented. What wasn’t so publicized was that this quest extended to Antarctica.

In 1946, a U.S. Counterintelligence team is sent to investigate the “rumors of a mysterious Base 211 in Queen Maud Land.” They never return.

Drilling below the ice at a base at the South Pole, a “veritable fortress commissioned by Hitler in the face of inevitable defeat,” Hollis’ people have discovered bacterium that reacts to sound, similar to that now echoing through the water under the ice. They’ve also found something completely unexpected.

“Richards leaned closer to the screen where he could clearly discern several manmade structures.
‘My God,’ he whispered. ‘It’s a pyramid.’
'And that low-pitched hum we’ve been monitoring?’ Mariah said. “It appears to be coming from inside.’”

A team goes underwater to investigate, but what they find isn’t what anyone expects. Bodies of other-than-human creatures lie in a sealed chamber—similar to those Cade Evans found in the Egyptian tomb, as Jade Liang discovered among the bodies in a Nigerian jungle burial pit, like those Russian fossils from which Anya Fleming took DNA.

There’s also evidence that the Germans originally inhabiting the camp also managed to explore the pyramid before they abandoned the station.

“‘The Nazis set out to find the lost city of Atlantis and here you stand at the edge of a lake at the bottom of which lies the ruins of a civilization that shouldn’t exist, holding the proof of their success in your hand.’”

If that’s so, if Hitler’s dream had so obviously been realized, why was the camp abandoned? Why did the men board a U-boat taking them to Argentina where they surrendered to authorities?

It isn’t long before Hollis and his crew discover the truth about Analysis Station 51 as well as the fate of the U.S. team sent there in 1946.

Like the bacterium retrieved from the lake, surviving at temperatures lower than anywhere else on Earth, not really breathing, but still alive and reacting to stimuli such as sound waves, the thing, imprisoned in the underwater pyramid’s chamber, has also survived. Cut off from the outside world by location, freezing temperatures, and howling, blinding winds, Hollis’ people are dealing with “a species that not only has the ability to re-animate the dead, but one whose numbers could be multiplying at that very moment.”

And there’s no way to escape, and nothing to do but fight.

Probably the worst feeling in the world is that of isolation, to be cut off from one’s fellows by location or lack of communication. Add to that sensation the threat of imminent annihilation, and an idea of the predicament those at Station 51 experience may be somewhat achieved. If the reader is doing this from the safety of his armchair, that empathy won’t be completely authentic, though as he continues reading, he’ll be thankful he isn’t actually there.

The combination of cold, isolation, and threat to human life is a formidable amalgam. Harkening back to John W. Campbell Jr’s Who Goes There? forming the basis of the movie The Thing, any such story will fuse into a tale of horror, panic, and an occasional act of heroism.

Using a minimum of scientific explanation that might otherwise slow down the less theoretically minded reader, author McBride infuses his story with enough exposition to set the plot and send the first of many shivers down the spine having nothing to do with the temperature.

With the added knowledge that each of his main characters already has an inkling about the creature they are facing, and now their various theories are about to be tested and found to be true, each character is given a brief moment of gratification even as he fights for his life.

As the first in the series, Subhuman rises above the usual primary series entry in its depiction not only of the authenticity of its characters but also in the scientific basis of its plot. There is also the barest suggestion that this story isn’t over but will be carried through into the second novel. For those who like stories of terror in out of the way places, this one should be high on the list.

Looking forward to the next!