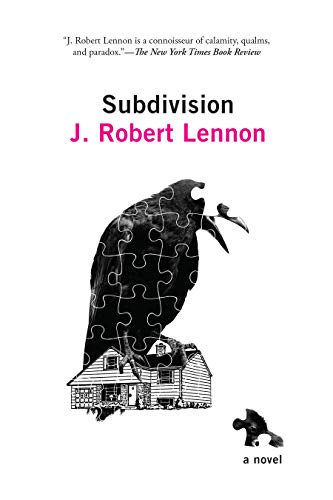 “What a pleasure it is! Page after page features passages that beg to be read again, with wonderfully inventive visuals along the way. . . . cryptic chills and surprises lie around every corner.”

Readers of J. Robert Lennon’s Subdivision who are especially fascinated by the creative process might wonder if the story was written in the mysterious space between wakefulness and sleep. That’s the point when fatigue kicks in and everyday surroundings become surreally altered . . . making you wonder if there’s a secret room behind that closet door . . . or if the houses across the street are nothing more than facades . . . or about the possibility that your reality is a dream in itself.

It’s easy to see all of these things going through Lennon’s mind as he reveals the setting for this masterfully told story—a neighborhood at the edge of a city and replete with absurd characteristics. The kind of place millions of people grow up in, yet filled with strange buildings and people who aren’t quite right.

It begins as its unnamed narrator, a young woman, steps into a guest house and is immediately encouraged to work on a jigsaw puzzle partially assembled on a dining room table. The guest house is run by two elderly women who are retired from the legal profession, and the early narrative offers no explanation of why the unnamed narrator is there.

The next day, with advice from her hosts, the narrator ventures out into the subdivision in search of employment. Descriptions of the buildings, grounds, and characters she encounters in this familiar yet odd landscape deepen the sense that we’re in an alternate reality, with touchstones that recall the world of Lewis Carroll.

And what a pleasure it is! Page after page features passages that beg to be read again, with wonderfully inventive visuals along the way: a house with vertically-stacked rooms; a charming cottage occupied by a strikingly handsome tenant transformed in an instant to a hellish outpost; two twin office towers, one “alive” and one “dead;” along with other places offering clues to an apocalyptic past.

Indeed, it isn’t long before readers are led to believe the entire world Lennon has built is a before-and-after place, which deepens the story’s nightmarish vibe while propelling the narrative forward. After touring the picturesque cottage and its garden (which of course has a croquet court), for example, the narrator has one of several uncanny experiences:

“As we came around the side of the house, I turned for one last glance at the lovely back yard . . . my gaze, however, fell upon the western window of the living room, and then out to the yard again through the eastern window.

“What I saw puzzled me. The living room appeared normal . . . but as seen through both windows, the back yard looked different. The apple tree was dead—blackened, in fact, as though it had been partially consumed by fire. The fire pit and bench swing had been destroyed; their pieces scattered about on stony, weedy ground. And from the hills in the distance, smoke rose.”

Shortly after that moment, the narrator has a far less subtle interaction with the handsome tenant, sparking the sense that the devil is alive and well . . . which portends the possibility that the narrator is facing a reckoning tied to past sins, that strange puzzle, and those two strange jurists back at that guest house.

Lennon is the author of nine novels and three story collections, including Let Me Think, a group of short pieces that weave similarly absurd and vivacious visuals into tales about everyday life. He’s one of those rare contemporary writers who’s forged a unique way of storytelling that fuses imagination and reality to create narratives that are presently compelling and resonant long after the last words are read.

While It’s easy to envision his work being analyzed by the MFA crowd, the plots and language are equally appealing to everyday readers who want accessible storytelling that’s intriguing as opposed to confusing (or so obtuse that it takes a room full of those MFAs to figure out what the stories mean).

Yes, he’s brilliant, but he knows the writer’s most important priority is to entertain. Which is exactly what he does in Subdivision, where cryptic chills and surprises lie around every corner.