Style and the Man 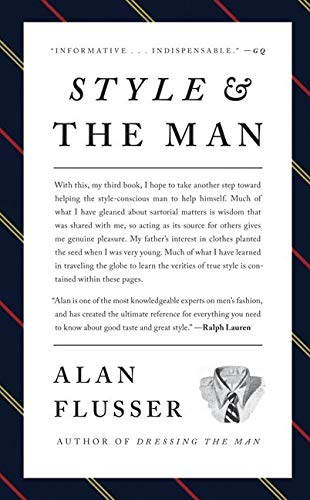 One might expect that a book written on the subject of style should be made very reader friendly.  One might expect this, but that is not what is delivered in this reissue of a 1996 edition.Mr. Flusser, who is a designer of great style, needed to first update the information in Style and the Man, as it was as outdated as nickel candy.  What is most staggering about this supposedly informative volume is that it is written in the most pretentious tone and imparts some of the most obviously known facts, not contributing to the overall body of knowledge like its title would suggest.  The reality is that a career salesperson would be scratching his head at “the cynosure of the tailored man’s presentation.”  The arcane and rarefied verbiage of the book is insulting to anyone who considers himself to be stylish, let alone informed on the elements of personal style . . . and, oh yes, intelligent!It appears than instead of taking a simplified approach to the subject, Mr. Flusser has chosen to write in a style that is incomprehensible to nearly every imaginable human being on this earth.  The concept of style can surely be made more understandable than this, or else there would not be a single sale of any men’s—designer or off the rack—apparel any where in the world, at any price.Mr. Flusser makes even the most renowned male clothes’ horse into a pile of everyday manlihood who is left with not even the vaguest clue as to why or where or how he has managed to be considered stylish.