A Study in Murder: A Victorian Book Club Mystery 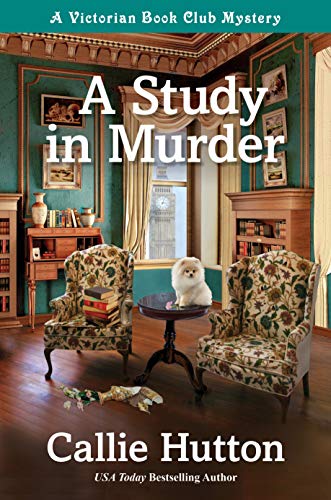 “A cozy delight, with a charming heroine possessing an irrepressible ‘nose for mystery’ and an able hero willing to aid and abet.”

When Lady Amy Lovell, daughter of the Marquess of Winchester, women’s rights advocate, and pseudonymous mystery writer, receives an unsigned letter accusing her fiancé of being part of the illegal opium trade, it gives her the perfect opportunity to break their betrothal.

Amy hadn’t wanted to marry Ronald St. Vincent anyway; it was merely to please her father that she agreed to the engagement. She is certain Ronald only agree because he wished to gain her fortune.

To her surprise, Ronald appears at her home a few days later, asking to see her. Since Amy has another guest at the time, she has him shown to the library but when she goes to see him, he isn’t there.

Her former fiancé is in the garden. Stabbed to death.

“Amy backed away from the body just as William raced through the library door. ‘What happened? I heard you scream.’

She shook her head as she continued staring at the body of Mr. St. Vincent, a very large knife sticking out of his chest. All the blood left her head and from what seemed a vast distance, she heard William call her name as her knees gave way and she slid to the floor.

Dear God, don’t let me fall on a dead body!”

When the police are called, they immediately accuse Amy of killing Ronald, giving the breaking of the engagement as the motive.

“‘This isn’t a high-class ball where you can come and go as you please. This is murder. Since she’—Marsh pointed to Amy—‘admitted chucking the man, and he’s dead in her house, she is our main suspect.’”

There are numerous other persons who had a much greater reason to murder Ronald: His nephew and heir, who was recently informed he was cut out of his uncle’s will; his former fiancée, who was jilted so Ronald could become engaged to Amy; his business partner in crime with whom he’d quarreled over the profits of their ill-gotten gains; as well as the writer of that anonymous letter.

Why is Amy the only suspect?

Her father has retained a barrister to speak for her.

“Stay out of trouble, daughter. Send me a message if the police return with the absurd idea of arresting you.”

Nevertheless, Amy can’t sit still. She turns for help to Lord William Wethington, her friend and a member of the Mystery Book Club of Bath to which Amy belongs.

When Amy tells William she intends to investigate and clear her name, he reasons that a woman can’t do anything better than Scotland Yard can. Upon learning that Amy is the writer who has penned some of his favorite mysteries, he changes his mind.

‘Well done, Amy. You almost had me believing that.’

He shook his head. ‘Surely you jest. E. D. Burton is a very talented mystery writer. He is also most definitely a man. No woman could write such things.’

‘No, I do not jest, and yes, a woman could write such things. Because I do.’

‘Why?’ He almost choked on the word. ‘Why would a sweet young woman such as yourself write horror stories?’”

The two set out to clear Amy’s name and before they’re done, they’ll find themselves involved in more murders and nefarious doings that rival one of Amy’s novels, as well as uncovering a scandal or two.

This is definitely a “cozy” mystery, with its Victorian setting and its quirky characters that include a feisty Pomeranian missing its tail and a 30-year-old cockatoo that quotes Shakespeare.

A Study in Murder may mimic Sir Authur Conan Doyle’s A Study in Scarlet in title but its characters are nothing like the coldly deduction-oriented Sherlock Holmes and his literary companion, Dr. Watson. While not blatantly headstrong, Amy is definitely outspoken and determined to prove her worth, not merely as a woman but also as a person. William manages to see the humor in situations, though he has to keep reminding himself that Amy isn’t the run-of-the-mill young woman who is too delicate for her own sensibilities. He quickly manages to see this new side of her, through “stubborn disbelief, denial, and finally acceptance.”

A Study in Murder is a cozy delight, with a charming heroine possessing an irrepressible “nose for mystery” and an able hero willing to aid and abet. It’s the first in a new series, as evidenced by the epilogue, which offers a tantalizing glimpse into the next venture for William and Amy.