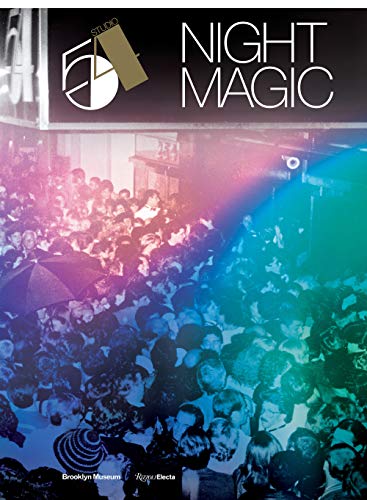 Studio 54: Night Magic serves as a catalog for an exhibit that took place at the Brooklyn Museum, which means that the parameters for assessing a book of this type within the genre differ from its “cousins.”

It is a rare moment when the written word accompanied by photographs cannot fully tell the story or convey the mood and essence of a bygone era. Whether in Studio 54: Night Magic or in Ian Schraeger’s Studio 54, neither can truly offer the reader the reality and exhilaration that came with entering Studio 54.

Studio 54: Night Magic is a more technical and factual telling with diagrams, barely readable news clippings, door lists and background of this once in a lifetime disco, not a night club as it is described in the book. Yes, it was all about the  theater of New York City night life, but by no means was it a nightclub—it  was the place to be, to dance, do drugs, see and be seen, and to lose yourself in this magical, fantastical world that was Studio.

Yokobosky takes a decidedly different tack in describing the life and times of this phenomenon that only lasted three years and has endured the test of time for over three decades. He has chosen to explain the background and the mindset of Studio’s two owners while constructing and conceiving this pleasure palace, which is not the information that many readers will be searching for when they purchase the book. While the book may be interesting and amazingly visionary in many ways, the prospective reader wants to either relive being there or bemoan not having lived through this era.

The author has somehow rebranded Studio 54 as an event space given its focus on “special event evenings” as well as a nightclub, when in fact it was the disco of discos and the barometer by which all others were and are judged to this day. This reader found the telling disjointed and, in many ways, tangential to what the actual “moment” captured at a time when New York City was falling apart, yet the raw hedonism of Studio 54 reminded you of Nero fiddling while Rome burned.

One can only surmise that the museum exhibit itself is more inspiring than the book, but there are some who will revel in this telling of a legendary era and club in the long history of New York City nightlife.

Bluntly put, maybe you just had to be there to experience it and to understand what made this rarefied place so different and unique when compared to any other cha-cha palace you danced in anywhere in the world.