The Structure Is Rotten, Comrade 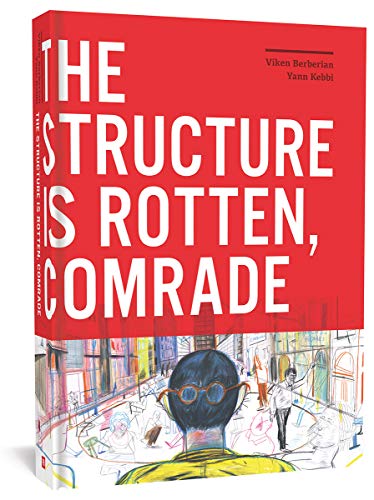 To appreciate this surrealistic story, you should know something about the realities of urban renewal worldwide, the city planner Le Corbusier devoted to the use of cement in his “Brutalist” structures, Armenia, the Soviet Union, and revolutionary movements against dictators. It would be desirable also to know about Alexander Tamanyan, the Russian-born Armenian who developed a master plan for Yerevan and began to implement much of it, using classic forms, in the late 1920s.

The artwork in this large format book is printed on thick paper and stunning and powerfully illustrates the story—that of a contemporary young man trying to follow the lead of his city planner father in Yerevan. Son of a French woman and Armenian father, the boy is born in Paris and returns there after a populist mob in Yerevan drives his father to suicide.

Paris in this story is today’s Paris—said to be the world’s most beautiful city but shrouded in smog. A revolutionary thug from Yerevan shows up in Paris to intimidate the downcast idealist who has lost his father to revolution. As the idealist youth enters the metro, the barefoot thug curses him: “May they bury you under three hundred tons of cement.”

Even without much knowledge of Armenia and its ambience, this book is spellbinding for its art and fast pace. If you liked Persepolis by Marjane Satrapi (2007) or The Arrival by Shaun Tan (also 2007), you should spend at least a quarter hour perusing The Structure Is Rotten, Comrade.