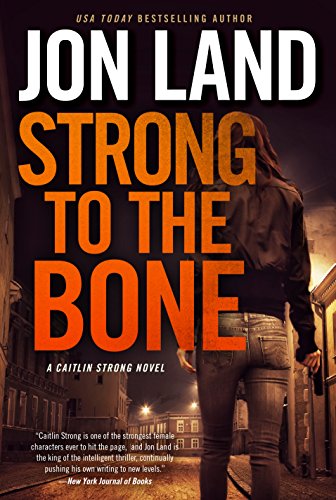 “one of the best Caitlin Strong novels . . . An absorbing but reflective thriller.”

Among the phrases that might be used to describe Jon Land’s latest Caitlin Strong novel are page-turner, can’t put it down, spine-tingling, nonstop action, keep-you-up-at-night. Even though some of the phrases are time worn, they are all accurate. Jon Land can tell an exciting tale as well as anybody, but better than many.

Strong to the Bone pits Texas Ranger Caitlin Strong and her disreputable (to some) lover, Cort Wesley Masters, against a neo-Nazi threat that is as dangerous to Texas and the rest of the country as any previous organization the two have faced.

Stone-cold killer Armand Fisker and his organization of bikers, his “. . . distribution network that puts Walmart and Amazon to shame, . . .’’ the drugs flowing across the borders, both north and south, his backdoor control of Redfern Pharmaceuticals through cash loans to, and physical intimidation of its CEO, David Skoll, are only ways to reach his ultimate goal: a personal empire based on a Nazi blueprint.

The novel begins on a flashback to Caitlin’s grandfather, Texas Ranger Earl Strong’s investigation of a triple homicide at a German POW camp in 1944. An escaped prisoner has murdered his three bunkmates and disappeared into the Texas landscape.

Earl’s first question is why one Nazi would slit the throats of three fellow Nazis. His second question is why FBI Director J. Edgar Hoover arrives at the POW camp and personally takes over the investigation. “Well, then, Ranger,” greeted the man, who looked somehow familiar, “let me respectfully inform you that your services are no longer needed here.”

No one, including the Director of the FBI, tells Texas Ranger Earl Strong that he isn’t needed to investigate homicides. This is Texas, and by God, no one kicks a Ranger off a case.

Flash forward to the present in an Austin barbecue joint where a fight breaks out between drunken patrons and is proceeding in the direction of a full-scale riot, when Caitlin and Cort Wesley encounter a young police officer sent not to quell the fighting, but to investigate an anonymous call reporting a sexual assault in the restaurant.

Caitlin commandeers a fire truck, plows through the crowd, and discovers an unconscious girl on a couch with a man leaning over her and holding something shiny. Caitlin shoots first before learning the man is holding a cell phone, not a gun.

Her captain is very unhappy at her actions. She stole a fire truck, turned a high pressure water hose on a crowd, and shot a pickpocket for stealing a cell phone. Yes, Captain Tepper is very unhappy with what he calls “the winds of Hurricane Caitlin.” He goes on to tell her “shooting unarmed men tends to play poorly, even in Texas.”

Caitlin is mostly unrepentant about saving a rape victim until she learns the DNA on the victim doesn’t match that of the man she wounded. What shocks her, and recalls her own rape 17 years before, is learning that the DNA is a match to the DNA of her own assailant. The predator has been drugging and raping young college girls for at least 17 years if not more.

Then Caitlin is told she can’t investigate the rape case—and most especially can’t interrogate the victim. Orders from Homeland Security. Kelly Ann Beasley isn’t her real name, because her family is under the protection of Homeland Security as material witnesses.

Like her grandfather, Earl Strong, and his ignoring J. Edgar Hoover, Caitlin has no intention of abandoning her hunt for a serial rapist, who 17 years before had the bad judgement to rape her. The Texas Rangers never give up, and she’s a fifth generation Ranger, Homeland Security be damned.

Another flashback to her Grandfather Earl’s hunt for the escaped Nazi POW finds the old Ranger tracking the prisoner to a hotel in Austin, where the German has left another dead body—this one an American. Earl decides that someone in Texas is helping the Nazi, but the question is why.

As Caitlin tries to trace the rapist, another problem arises; this one involves her lover Cort Wesley’s son, Dylan. Taking a year’s sabbatical from collage, Dylan is working at a mechanic’s shop that employees several Mexican immigrants. A pickup full of Neo-Nazis drive by and threaten the immigrants. Dylan intervenes, and now he is the target of likely deadly retaliation.

Cort Wesley traces the pickup’s license plate to Elk Grove, Texas, a ghost town not on any map. Cort Wesley finds it anyway, but the ghost town has been rebuilt and is now owned by Armand Fisker. Cort Wesley’s confrontation with Fisker, whose son owns the pickup, ends with Cort facing several armed bikers.

Cort Wesley had spent five years in prison on a false charge with Fisker’s father, a nasty piece of work responsible for the Aryan Brotherhood. Cort contacts Guillermo Paz, former head of Venezuelan’s Secret Police and leader of its Death Squad, now on God’s side—unless some evil individual is threatening his friends.

Caitlin, Cort Wesley, Dylan, Fisker, Skoll, Paz, flashbacks to Grandfather Earl—all the pieces are in place, and the action shifts into high gear, leaving one turning pages nearly faster than one can read.

Along with Caitlin’s hunt for the rapists and her suspicions of Armand Fisker, and Cort Wesley’s and Guillermo Paz’s gunfights with Fisker’s son, there is also the mystery from the past. Who was the escaped Nazi POW who leaves a trail of dead bodies across Texas, and why did Grandfather Earl never mention the case to Caitlin before his death?

Strong to the Bone by Jon Land is one of the best Caitlin Strong novels, not because of the nonstop action, but because Caitlin must confront her past, and finally come to terms with the sexual assault that changed her life. An absorbing but reflective thriller.