Strike from the Air: The Early Years of the US Air Forces 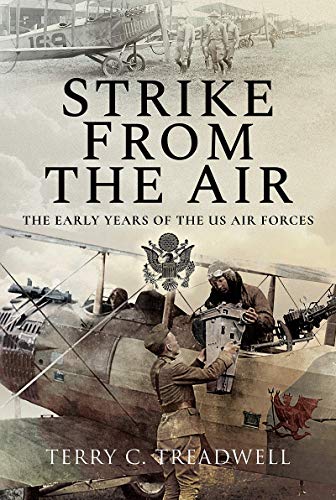 “Only the far-seeing vision and persistence of those first aviators allowed this new mode of warfare to survive its infancy until the First World War showed that airplanes were not just a new gadget but would soon become an integral part of a country’s armed forces.”

The invention of the airplane and the development of military aviation have been a hallmark of 20th century warfare. Airpower prophets like Giulio Douhet and Billy Mitchell anticipated a future where strategic and tactical airpower would change how wars are waged, bringing destruction from the sky for both soldiers and civilians on a massive scale.

But the actual creation and development of American military air forces was very much an uphill battle against a skeptical bureaucracy, as this noteworthy new volume shows. Beginning with the Wright brothers and their very first attempt to convince the U.S. Army of the utility of aircraft, the book chronicles the little-known story of how aviation capability evolved for both the Army and Navy during the first two decades of the 20th century.

Both the War and Navy Departments expressed doubt over the ability of highly fickle and fragile wood and cloth airplanes to function in the rigors of combat and the author reveals how the early aviators of both services had to literally build a new way of waging war from scratch. Early pioneers in both services struggled to develop technology, doctrine, tactics, weapons, and even the fundamentals of training pilots and mechanics, all with little funding or institutional support.

When World War I started, both services watched with interest as aviation made rapid advancements in technology and doctrine. Although both services had achieved their own trial by fire, the Navy during the 1914 landing in Veracruz and the Army supporting the Pancho Villa Expedition, the author describes in great detail just how far behind America was behind the European powers in military aviation. When the U.S. entered the war in 1917, the country was totally unprepared for the scale and scope of military forces required and had completely inadequate aircraft production capacity to meet the growing needs of a rapidly expanding air arm. The American Expeditionary Force relied on British and French aircraft and engines to equip nearly all of the squadrons in the rapidly expanding American Air Service serving on the Western Front

The life span of a World War I aviator was measured in weeks, and the author provides an excellent mix of personal accounts of American flyers in action, many of whom signed up before America’s entry in the war to fly for Britain or France.

The stories of Frank Luke and Eddie Rickenbacker may be familiar to aviation enthusiasts, but the tales of many other American flyers may not be as well known, especially the first Americans shot down behind German lines and sent to prisoner camps, of which the author provides an entire chapter of their tales of life as a prisoner of war.

The improving numbers and capability of Allied aircraft, along with the influx of American pilots and ground crews, provides the nucleus of a successful American air corps that is finally able to make some contribution to the final Allied offensives in fall 1918, foreshadowing the fleets of strategic bombers and tactical fighter-bombers that would fill the skies of Europe a generation later.

Naval aviation also played a key part in the final months of the war, with naval aviators conducting long missions in flying boats protecting Allied convoys from German submarines. By the end of the war, the United States Air Service and naval aviation were now a part of the American military structure and would see continued growth and technology advancement in the interwar years.

The author then includes a chapter on the small group of American World War I veterans that took to the skies over Poland after the war, supporting the new Polish government in the 1919–1921 Russo-Polish War. Offering their services against the Bolshevik Red Army, the pilots, flying mostly surplus German aircraft, provided yeoman service to the Polish Army, aiding in turning back the Red Army invasion, leading to an independent Poland until 1939.

For aviation enthusiasts and students of airpower development, this is a remarkable book that shows just how difficult a start American military aviation endured. Only the far-seeing vision and persistence of those first aviators allowed this new mode of warfare to survive its infancy until the First World War showed that airplanes were not just a new gadget but would soon become an integral part of a country’s armed forces.