Strength in Stillness: The Power of Transcendental Meditation 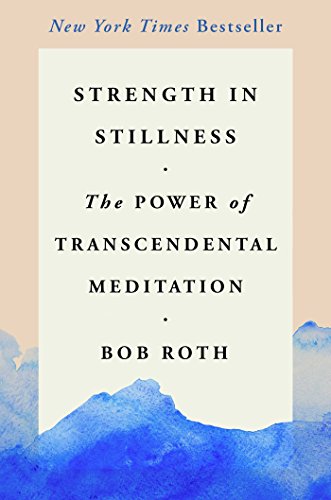 The cost to learn Transcendental Meditation in the reviewer’s area is $960. Across the border in Vancouver, Canada, the cost is over $1300 (Canadian). It should be noted that 100% of the proceeds from the book go to scholarships for at-risk populations to learn Transcendental Meditation. If you know that before choosing to purchase or read the book, you can go in with a more accepting heart.

Meditation of all types is a practice that takes one into his/her inner self. It is a mental exercise that can calm the psyche and on occasion, leads one to heightened states of spiritual awareness. It is an action that works to quiet the mind.

Roth says of meditation, “Meditation has long been associated with ideas of inner equanimity, clarity, focus, creativity and strength.”

The question is, are all types of meditation the same or if not the same, equally effective at reaching that state of inner-calm and serenity so many people seek? Roth’s answer to this question is an emphatic, no. He writes, “scientists have found marked, and important, differences in the way the brain functions during these different practices. Likewise, the cardiovascular, respiratory, and nervous systems each respond differently to each meditation technique.”

What the book does exceptionally well is lay out exactly how one will benefit from Transcendental Meditation and what to expect in the four learning sessions one can purchase to learn the practice.

Meditators learn to access deeper levels of the mind, levels of calm and insight that persist into the rest of their day, making them less agitated and helping them to act with greater insight and clarity. Transcendental Meditation, like all forms of meditation, has this goal. The mind desires that which is calm and if trained or given access, will allow itself to be led or go to where it receives the greatest satisfaction. Transcendental Meditation uses a mantra to get one to this “unique state of restful alertness.”

If you have decided that you would like to learn Transcendental Meditation, classes are offered frequently around the nation and globally. The practice “is taught over four consecutive days, about ninety-minutes each day.”

In Strength in Stillness, Roth details what happens in each of these days, from the private session in which one is given a mantra to follow-up sessions.

Strength in Stillness is also full of first-hand accounts of individuals who have used Transcendental Meditation, some of them celebrities or individuals in high-profile positions. These can seem a bit too much and reek of name-dropping. However, there is one story of a regular individual who has learned Transcendental Meditation; it was much more appealing and gave a more balanced view of how an average person might respond to the technique.

The main benefit of Transcendental Meditation, and indeed all forms of meditation, for trauma and addiction treatment is that it accesses a part of the brain that brings calm without stimulating the trauma itself. Anyone who suffers from these disorders or knows someone who does should consider a regular meditation practice as an adjunct to other forms of treatment, particularly psychotherapy. Meditation can support and improve outcomes for many forms of mental illness treatment.

The stories about celebrities and their practices don’t correlate with the day-to-day lives of regular practitioners and the cost to learn the practice feels out of line. If Roth and his cohorts have something that meets the hype in his book, they should be giving it away to those who most need it. A true spiritual practice is not a propriety product for sale.