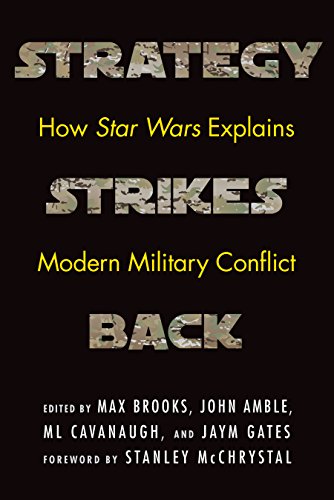 This may be the most innovative and interesting book on military strategy ever published.  While this may seem like an exaggeration, Max Brooks, bestselling author of World War Z and a fellow at both West Point’s Modern War Institute and the Atlantic Council’s Art of Future War project has done the seemingly impossible—made the esoteric subject of military strategy simultaneously fun and educational to the masses.

Why is this important? As Brooks notes in the forward, the fundamentals and history of strategy and its interaction with politics and war can be dreadfully dreary to read and often hard to understand in a modern context, as any military officer, graduate student, or military historian can relate.

Reading Thucydides, Sun Tzu, and Clausewitz may be a necessary rite of passage to understand the history of strategic thought, but relating them to modern warfare and its language of counter-insurgency, hybrid warfare, and “gray zone” conflict requires a great deal of time, patience, and abstract thought.

This volume takes a completely different approach to explaining both the eternal nature and modern intricacies of strategy, politics, and conflict by using the popular Star Wars movies as a common frame of reference for discussing the many issues and challenges modern practitioners of the strategic arts face.

As he again notes in the foreword, to have a useful discussion of strategy, the participants must have a common frame of reference, and while not everyone has read Thucydides or studied the myriad of recent conflicts in the Middle East, nearly everyone in America has seen many, if not all, of the Star Wars movies.

This makes for an imaginative, fun, and surprisingly educational take on many relevant and timely topics. Individual essays by selected military and strategic thought leaders cover a wide range of issues:  planet building on Endor, the civil-military relationships of the Galactic Empire, Darth Vader’s failed counter-insurgency strategy, and the inadequacies of the Jedi Knights as conventional military leaders to name a few.

These essays are not only enjoyable and thought provoking for Star Wars fans (you will never look at Gungans or the Jedi Knights the same way again after reading this book), they allow the authors to incorporate very serious themes without overwhelming the reader with a lot of acronyms and jargon common to “serious” books on military strategy.

However, in spite of their imaginative content, each essay is well grounded in current events and issues and well sourced, so that if a reader wants to dig deeper into the topic, there are references available.

If you have ever had to plow through Thucydides, Clausewitz, Mahan, or any of the great masters of military strategy, read this book. It will open your eyes to thinking differently about strategy and how it can be applied to messy or seemingly endless conflict.

One of the most interesting observations made in the book was that warfare between the Empire and Rebel Alliance and their offspring the First Order and Resistance lasted nearly the same length in the Star Wars Universe as the Peloponnesian Wars—science fiction and history can indeed have a strange symbiosis.

The best way to describe this book is Clausewitz meets Darth Vader, and fans of either will find much to enjoy in this book as it educates and entertains simultaneously—high praise indeed for a book on military strategy.