Great Strategic Rivalries: From the Classical World to the Cold War 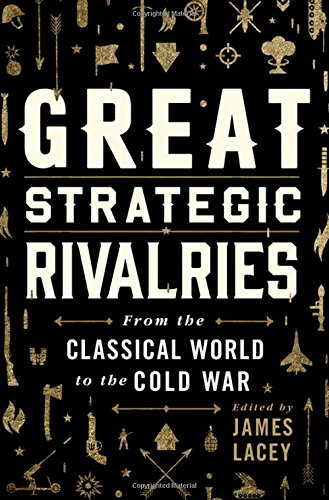 “Great powers’ rivalries often begin by sheer human failings, and this book shows there are ways to resolve them peacefully.”

The strategic issues between two great powers, whether regional or global are wide and varied. The case studies presented cover the gamut of history from the Rome-Carthage conflict that shaped much of the ancient world, to the centuries of rivalry between Britain and France, to the more recent competition between the United States and Soviet Union that shaped the last half of the 20th century.

Like all the other volumes in this series, this is a dense book that anticipates the reader has a strong historical background and knowledge of the basic facts for each essay. Well researched and exceptionally sourced, it is clearly intended for the military or government professional or the graduate student seeking a better understanding of how bipolar strategic rivalries begin, are sustained, and either end in conflict or peaceful resolution.

Dr. Lacey begins this volume with a thorough and well-constructed essay examining both the historical context of each case study and the overall challenge for historians and social scientists to determine what sort of data can be gathered and analyzed and what lessons can be drawn from a study of bi-polar rivalries.  This introduction does an excellent job of laying the groundwork and providing an intellectual roadmap for the reader to dissect the case studies that follow by providing some parameters for the reader to evaluate and consider each author’s facts, analysis and conclusions.

This introduction is key as this book, like others in the series, is intended to show the enduring issues that span the gamut of history, especially, in the case of the examples provided in this volume, the effect of great power rivalries on smaller allies of each protagonist and the long-term disruptions to larger economic and political systems of these rivalries, especially those that shift the “global” balance of power.

The editor has done an excellent job of going beyond the obvious choices for case studies to examine some lesser known but strategically interesting conflicts such as the Hapsburg Empire and their Ottoman rivals, Genoa and Venice, and Rome versus Parthia.

Even an expected case study such as the century’s long rivalry between Britain and France is broken into three distinct phases to offer more thorough examinations of how this rivalry evolved from its medieval and dynastic beginnings through an imperial conflict to the final struggle during the Revolutionary/Napoleonic era that changed all of Europe. These essays are particularly useful in showing that even an enduring rivalry that spanned centuries changed and evolved as politics, technology, and economic circumstances changed.

These case studies are extremely well chosen not only for their historical significance, but for the lessons that can be applied to today’s global challenges.  As the editor notes in his introduction, many dangerous rivalries begin not from direct military confrontation, but more often economic, ideological, or what he describes as a “shock” to the global system, such as the current rise of China as a major power in the Pacific Region or the growing hegemony of Iran in the Middle East and Persian Gulf.

All of these current events make this a very timely and thought provoking book.  Over 4,000 years ago, Thucydides, the progenitor of all military history, noted that nations always conduct their affairs out of fear, honor, or interest, and this book shows that history certainly bears out this maxim. Great powers’ rivalries often begin by misunderstanding or sheer human failings, and this book shows that while they often end in tragedy and violence, there are ways to resolve them peacefully.