The Strangling on the Stage 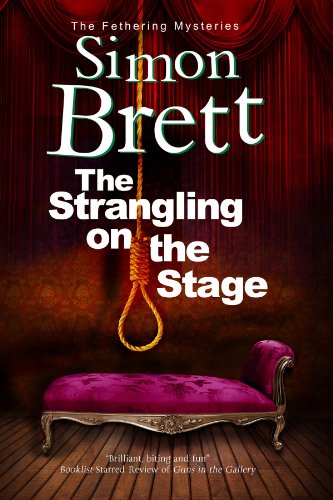 “. . . an entertaining whodunit, with one drama going on before the footlights and another behind them . . .”

Jude wasn’t an actress, far from it. The only reason she knew about the Smalting Amateur Dramatic and Operatic Society was because of her chaise longue.

“. . . a much borrowed piece of furniture. . . . always borrowed by the same kind of people—amateur theatrical groups. . . . Not counting the times it had been borrowed before Jude came to Fethering, it had been featured in most of the church halls of the area in a variety of thespian endeavours.”

Enlisting the aid of her friend Carole, Jude takes the chaise to the rehearsal hall. The play is The Devil’s Disciple by George Bernard Shaw, the cast a cliché of characters with a plot already thickening.

There’s Elizaveta Dalrymple, the diva and widow of the founder: “The manner in which she spoke . . . suggested she had spent rather too much time watching Maggie Smith.”; Mimi Lasseter, membership secretary and as tenacious as a rat terrier about securing members’ dues; Heather Winstone, “I’m not important. I’m just the prompter”; and Gordon Blaine, in charge of building sets and others devices—of which some don’t always work, and some work a little too well.

There’s also Ritchie Good: handsome, talented, and possessor of  “the corniest line in the world, though Jude admired how he delivered it. He imbued the words with a sardonic quality, at the same time sending up their cheesiness, and leaving up the possibility that they might be heartfelt.”

It takes only a few moments for Jude to sense the tension, rivalry, and bickering among cast and crew. It’s hidden by some, brazenly demonstrated by others, but the first hint of a real problem is when she discovers Hester Winstone unconscious in her car.

“Hester was slumped a little sideways in the driver’s seat and her eyes were closed . . . as though she were asleep. Jude had no hesitation in snatching open the car door . . . the prompter’s arm flopped to the side . . . from her wrist bright red blood dripped on to the surface of the car park.”

Hester isn’t dead, but she and her husband both cover up the incident, after which she’s swept away to a sanitarium and allowed no visitors. As if that’s not enough turmoil, Elizaveta walks out of the production and Jude finds herself being cast in her place, as well as pursued by Ritchie. She cuts him no slack:

“To someone less full of himself, Jude would have been gentler . . . she had no problem saying . . . ‘I’m afraid I don’t feel anything for you . . . I can’t see you being very good at concentrating solely on one woman.’

‘Only when I encounter someone who prompts cynicism.’”

Immersing herself in the role and trying to ignore the snips and snipes around her, Jude thinks everything’s going well until the night Gideon Blaine demonstrates his construction of the scaffold on which Ritchie as the main character in the play is to be hung. The breakaway noose works fine, and everyone heads for the local pub for after-rehearsal drinks.

“Though still in a state of shock, Jude found her mind buzzing with possibilities . . .” among which is the fact that she doesn’t believe Ritchie was accidentally killed by a malfunctioning prop. Thus, amid the old standard “The Play Must Go On” and the cast’s denials that Ritchie was murdered, she begins an investigation. . . .

She discovers Ritchie was the male equivalent of a tease. He’d had near-affairs with several female members of the cast, but is that enough a motive for such a gruesome way to die? Apparently someone thought so, but who?

Having read other Simon Brett mysteries, I always enjoy the theater setting with one drama going on before the footlights and another behind them.  This one is no different, revealing the insincerity, insecurity, and pettiness in the lives of those who transform into characters other than themselves, if just for a few hours. Even for those indulging briefly, that dedication sometimes can lead to monomania, and if one has no other emotional outlet, it can lead to worse.

The Strangling on the Stage is an entertaining whodunit except for the ending, which seemed rushed and very disappointing. There’s no grand dénouement when the killer’s revealed, no recounting of motive before an audience of horrified suspects. The identity as well as the outcome are mere asides, mentioned in a few brief paragraphs—a rather abrupt ending to an otherwise entertaining story.