We Were Strangers Once 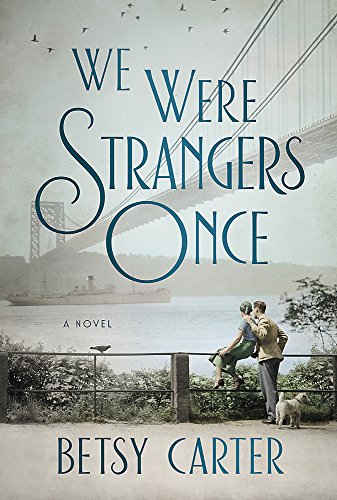 In this well-paced and enjoyable historical novel a Jewish doctor meets an Irish animal lover and hangs out with his best friend and other immigrants fleeing WWII atrocities in upper Manhattan. As the story unfolds the degradations they suffer bind them in ways that only similar experiences and disillusion can. Still, with one exception, their spirits rise above their trials and tribulations, most of the time, allowing for a cautious and credible denouement.

Egon Schneider, son of world-renowned naturalists and a respected ophthalmologist, has escaped Germany and now works as the “Cheese Man” in a Washington Heights grocery store.

Catrina Harty, who has already suffered great losses, has left Ireland in search of a better life in America. She works for the ASPCA where she lovingly prepares dogs for euthanasia, perhaps a metaphor for what is about to happen in Hitler’s concentration camps.

And the acerbic writer Meyer Leavitt, who has also escaped persecution in Europe, is reduced to wearing a sandwich board on a New York street corner, at least until he starts writing commentary for a local Jewish newspaper.

He is the most disillusioned of the lot. When Egon tries to console him one day he retorts, “God, I’m sick of us. We’ve become exactly what they wanted: insular, separate, our own little ghetto. We kiss everyone’s ass all week, and by the weekend we hate ourselves so much that we turn on each other because we’re all we’ve got.”

Egon, ever the optimist, replies, “Meyer, you are always telling me to look on the bright side, remember? We are in America. We have our lives ahead of us. Blah, blah, blah. Have you forgotten your own spiel?”

Each of these likeable characters musters on in their loneliness and reduced circumstances, finding solace from isolation as the Other in a new land through their weekly conversations at tea parties hosted by a couple who, tragically, cannot seem to leave Germany behind. It is this camaraderie and mutual support that keeps them going, relatively intact.

Late in the story, a tragedy occurs, followed by a potential crisis when Egon is threatened with deportation. But Carter brings her characters, and her readers, back from the brink and hope prevails.  So does implied victory for the characters as suggested by these closing words of the novel suggest: “So our story begins.” —Meyer Leavitt, from his book In the Free Country, published December 1946.”

The overarching theme of this well-executed story is the power of friendship amid the quest for redemption, and of course, love. Its verisimilitude derives in part from the fact that Carter, herself the daughter of German immigrants, grew up in Washington Heights and knows her setting well. She is also able to empathize convincingly with her characters. And interestingly, her latest novel has produced not only a good read, but a timely look at immigrant experience, given current events.

The book is not great literature, but it is historically accurate, warm, moving and easy to recommend.