The Stranger You Know (The Forensic Instincts Series) 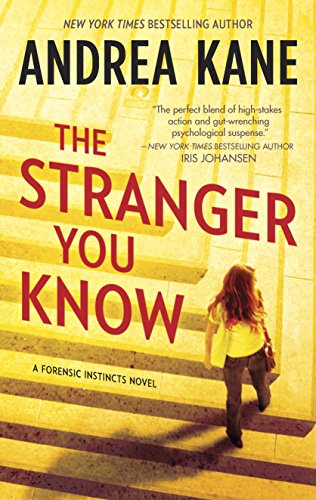 Andrea Kane is a New York Times bestselling author with a trail of successful books to her credit. Her Forensic Instincts series has garnered a plethora of mystery/thriller aficionados who thrive on suspense and surprise; however, she is also a successful author of historical romances—definitely a force to be reckoned with in the literary world.

In The Stranger You Know, Ms. Kane ratchets up the suspense immediately. The book’s protagonist, Casey Woods, promises a dying man that she will find his daughter’s killer. The problem is that the murder occurred 15 years ago, and the case has been gathering dust in the cold case file. In addition, the M.O. of the killer is similar to other murders that have occurred since. All have a common thread—the victims all had red hair. And our main character Casey Woods happens to be a redhead as well.

Casey and her FI team begin looking for answers to the man’s request utilizing a talented and diverse group of investigators. Diverse meaning the team includes a human-scent evidence dog, a wall of floor-to-ceiling video screens representing an interactive computer known as Yoda, a former Navy Seal/FBI agent/Behavioral Analysis Unit member, a current FBI agent assigned to the FBI BAU, and a clairvoyant woman who picks up mental images from articles of clothing and personal belongings.

The bad guy in the book, Glen Fisher, is a psychopath imprisoned in a maximum security cell. With a cache of dead bodies resulting from his twisted fantasies, this thug should be completely out of the picture.

But when rapes and murders begin to occur that match the crimes for which Fisher has been convicted, Casey and her crew begin an investigation that points to Fisher. But how? The man is in prison. Readers will have difficulty in determining Fisher’s involvement—if any—as author Kane weaves a complex tale full of surprises.

Without being too graphic, but certainly doing justice in portraying the crimes, Andrea Kane creates tension as taught as a piano wire, as she describes the killer stalking, attacking, and then killing his victims. A short illustration from a scene when the clairvoyant investigator picks up on an attack: “Pain. Agonizing pain. Terror. A woman. Struggling, clawing, fighting for her life. A monster overpowering her.” Scary stuff indeed. Great writing. It’s often what’s not said that scares us the most.

With multiple victims and myriad of possibilities that don’t seem at all possible, The Stranger You Know is an excellent thriller. The author has done a marvelous job of laying out the facts of the crimes. She takes her readers down logical yet sometimes improbable investigative paths to find the horrendous person or persons responsible.

Warning: Make sure your doors and windows are locked while reading this well written thriller.