The Stranger in the Mirror: A Novel 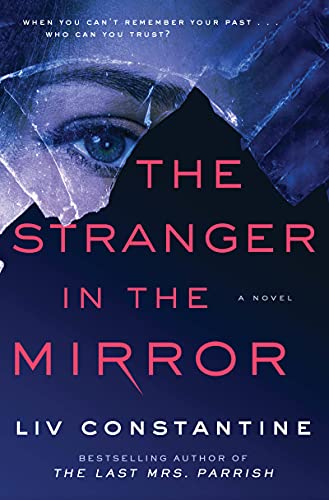 Addison Hope is living a new life in Pennsylvania. Two years prior she was found confused, disheveled, and wandering down a lonely country road. Middle-aged cross-country trucker Ed stops and offers her a ride.

Though hesitant, Addison is exhausted and climbs aboard. She requests water after Ed assures her he is not going to harm her. Her pants are ripped, and she has dried blood on her hands. They travel a while before Ed asks why she is hitchhiking and, seeing her condition, suggests taking her to the hospital.

"I find myself drifting off when Ed's deep voice startled me.

"'What's your name? You from around here?'

"My name? I had no idea. I scrunched my eyes shut and tried to concentrate, but my brain felt muddled and hazy. Taking a deep breath, I decided to tell him the truth. It was going to come out sooner or later anyway. 'I don't know. The thing

is . . .' I stopped and inhaled deeply again. 'The thing is, I don’t remember anything that happened before I was walking along the road, holding my head.'

"'You mean you can't remember how you got hurt?'

"'I mean I don't know who I am. I have no memory of anything except walking and getting into your truck.'

"Ed let out a low whistle. 'You have amnesia?'"

Concerned about the frightened and exhausted young woman, he decides to take her home. His wife Gigi is a nurse, and he believes she can care for her wounds since she refuses to go to a hospital.

Ed and Gigi take pity on her as they help her regain her memories. She recuperates from her injuries while living with them; they love and treat her like a daughter. Hoping to acquire an identity for her, Ed peruses cemeteries while on the road and finds a grave with the name Addison Hope—that of a child born in 1994, who died soon after birth. Ed manages, illegally, of course, to procure a birth certificate as well as a social security number so she can get a license and find a job. She accepts the name Addison, stating she likes the last name "Hope."

Time passes, and Addison considers Ed and Gigi like parents, but her memory is still a blur. Every so often she will have flashbacks and/or nightmares but she cannot understand what they are about.

To occupy her time, Addison enjoys taking photos then gains employment in a photography store. One day a striking man comes in asking advice about a camera. He glances around the store noticing Addison's photos posted on the walls. He introduces himself as Gabriel Oliver and states he is impressed by her work. When he invites her to lunch, he proposes showing her photos in his family’s gallery.

The attraction between them is instantaneous and before long they are engaged and planning their wedding. Addison, still unsure of her identity, is ecstatic, but Gabriel's mother wonders about her past so she hires a detective to search her past.

After two years Addison is no closer to discovering who she is. When she is in Philadelphia displaying her work at Gabriel's gallery, Julian Hunter, a prominent Boston psychiatrist, in the city for a medical conference visits the showing. When he spots Addison, he is shocked to realize she is Cassandra, his wife—the wife missing and away from him and their daughter Valentina for two years!

He hands Addison a photo telling her to look at it.

"She stared into the picture, her brows knitting as she held it up for a closer look. When she looked back at Julian, her eyes were clouded. 'That's me.' She glances at the photograph again. 'Who are you?'

"He had to tread lightly. 'Addison. That's not your real name, is it?'

"She took a small step back from him, and he saw fear in her eyes.

"'I'm not here to hurt you. I'm here to help you.' He hoped his tone was reassuring. 'You don't remember anything about your past, do you?'

"'Do you know me?' she asked, and Julian thought he saw a flicker of something like hope in her eyes.

"'I do.' He looked past her to see the curly-haired man approaching.

"'Everything all right here?' he asked, looking from Cassandra to Julian.

"'This man knows me.' Cassandra's voice shook. 'He knows who I am. He has a picture of me. From before.'

"'Let me see,' the man said, and Julian handed the picture to him. Then he brought out his phone and pulled up all the photos of Cassandra.

"'Take a look at these, too,' he said, giving the phone to Cassandra.

"'Oh my God,' she whispered, leaning against the wall as she scrolled through.

"The man next to her stared at Julian. "Just who are you?' he asked.

Addison/Cassandra finds her world crumbling around her. How can she be married and not remember? Furthermore, how can she be a mother and forget having a child?

Distressed, she does not know this man who calls himself her husband, and besides, she is in love with Gabriel. How can she go back to a life she cannot remember, especially when she fled from it? What if this man is an abuser? A liar? A fake?

Each character offers their own voice in this moving storyline, giving credence to each disturbing scenario. Beautifully written and articulate, the only puzzling portion of this novel is in Part III, (Four Years Earlier) before Addison/Cassandra fled. As Julian works with her through hypnosis, he discovers she has a Facebook page where she sends pictures of Valentina to Ed and Gigi. But she does not meet Ed and Gigi until two years later after fleeing from Julian with no recollection of him. An uncaught glitch? If so, the completely unexpected and shocking conclusion more than makes up for this error.

It must be difficult to lose everything one remembers of their life, and there should be a legitimate reason for this after medical explanations are ruled out. Did Addison/Cassandra commit a crime? Did she witness a crime? The Stranger in the Mirror is a nail-biting, page-turner with several subplots. The suspense and terror prove to be horrifying, making this a powerful read.