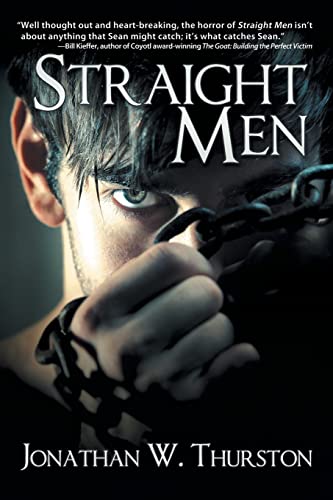 Sean, the main character in this novel, tells us there are two types of psychopaths. The first type is completely oblivious to their wrongdoing and can normalize even the most savage behavior. The second is fully aware of, and will relish in, their abnormal behavior. They will look you straight in the eye as they attempt to transfer their evil into your soul.

Sean is 19 and attends university in Tennessee. His cruel and homophobic father recently died, leaving Sean feeling a combination of love, grief, bitterness and anger. He likes sex—rough sex—and gets more and more entrenched in sadism and masochism in an attempt to block out his unhappy childhood memories. This also helps him to enter a state of desired numbness and feel nothing after he is penetrated. Using gay dating apps to satisfy his desires leads him into many unsafe encounters and practices, and eventually result in him meeting Mason, who changes his life forever.

Mason lives in a rural area on a rundown farm and is a total psychopath of every dimension. He drugs Sean, beats him, and repeatedly rapes him before placing an electronic collar around his neck which prevents him from leaving the house without experiencing electric shocks designed to render him unconscious if he exceeds a certain distance from the house and outside yard.

In addition to being held hostage, Sean is stripped of his clothes and has to remain naked at all times when forced to succumb to Mason’s more and more bizarre requests. He is constrained into becoming Mason’s houseboy and has to undertake cleaning and cooking tasks, and make himself available for sex whenever Mason feels the urge.

Mason also has house parties where guests queue up to rape Sean. Mason even trains his German Sheppard to have sex upon instruction and, once, when Sean was deemed disrespectful to Mason, he was tied down before the dog did as it was commanded, much to Sean’s disbelief. Failed attempts to escape result in severe beatings. Efforts by two of Mason’s friends to sell Sean into a trafficking circle vent his anger, resulting in him brutally murdering both men. Two of Sean’s friends eventually discover where he is being held and try to rescue him, but this ends in one of them being murdered.

This is just a taste of this fast-paced novel. Sean’s fate is left for the reader to discover. There is a clever prologue at the beginning of the book that gives an inkling as to how ruthlessly savage Mason has been to previous victims and how their torment ended, leaving the reader wondering throughout the novel whether or not a similar fate awaits Sean.

A question readers may ponder upon is whether this is really adult fiction or better placed under the young adult fiction genre. Although marketed as adult fiction, herein lies a problem. While it is a very readable novel, Thurston’s prose is plain and simple combined with a more “tell” than “show” feel to the story.

There is also a feeling of naivety to the plot and the characters. The main obstacle when reading it as adult fiction lies in the reader’s skill at dispelling reality by entering a surreal world where they can become detached enough not to question some of the more farfetched aspects of Sean’s plight. He is an intelligent young man but he overthinks everything and becomes so frightened of Mason that his escape attempts are only slightly feasible at best, to the point where they become uncomfortably unbelievable.

The novel does, however, contain many good points. It highlights the ludicrous way in which some gay men identify their sexual orientation. Some say they are men who have sex with men but aren’t gay. They hold the belief that provided they are the dominant partner during sex that this qualifies them as something else other than gay.

Mason, for example, while apparent that he is a psychopath, does not consider even for the slightest moment that he is gay. His friends who gang rape Sean also seem to share this viewpoint, hence the title of the book, Straight Men. They are all dominant during sex and all of them were homophobic, blind to the fact that this only harbours their own internal hatred of themselves. This leaves one wondering if emotionally damaged individuals of this ilk can really distance themselves so blindly from the true reality of life and their own existence.