Straight Around Allen: On the Business of Being Allen Ginsberg 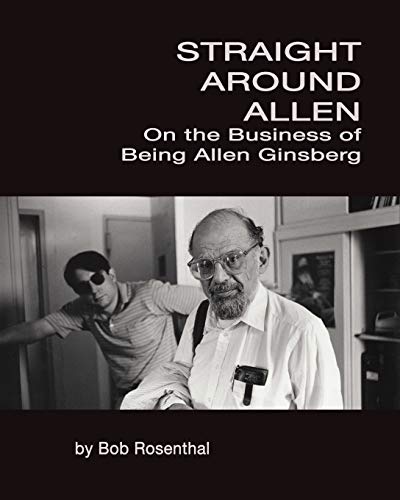 The Brits would call Bob Rosenthal an amanuensis. In fact, for decades he worked tirelessly as Allen Ginsberg’s secretary and factotum, opening and sorting his mail, managing his time, and keeping him on track.

It was no easy feat to be Allen Ginsberg. Indeed, it took a team to make sure he was up and running.

As Rosenthal reveals, he gave hundreds of poetry readings every year around the U.S. and the world. Ginsberg used the income from those readings to support his friends, including Herbert Huncke, the original Beat, who shows up in Ginsberg’s Howl as an anonymous man who walks all night with his “shoes full of blood,” and also in Kerouac’s On the Road as Elmo Hassel

Straight Around Allen takes readers behind the scenes and reveals the cottage industry that Ginsberg spawned and nurtured. It also takes on controversial topics, including his mistreatment of women.

“I naively call him a benign misogynist,” Rosenthal writes. “I have met many women who will never forgive Allen for his brusque treatment towards them.”

Ginsberg himself would probably cringe if he could read Straight Around Allen. (He died in 1997 at the age of 70.) But he also said famously, “Don’t hide the madness.”

Ginsberg’s madness is here, along with his egotism, his generosity, his many physical ailments, and his homosexuality. “Sexuality for Allen is a mountain he climbs all his life,” Rosenthal writes. He was the straight white male and a monogamous married man in a sea of seething Beat sexuality.

Straight Around Allen offers photos of the poet and his friends, notes Ginsberg wrote to Rosenthal and a list of the six different addresses where he lived on the Lower East Side of Manhattan from 1952 to 1996.

No 20th century American poet was more peripatetic than Ginsberg or more attached to New York.

There is no other book like this one, though there are dozens of books about Ginsberg. Bob Rosenthal has made a courageous and valuable contribution to the field of Beat studies.