The Story of the Lost Child: Neapolitan Novels, Book Four 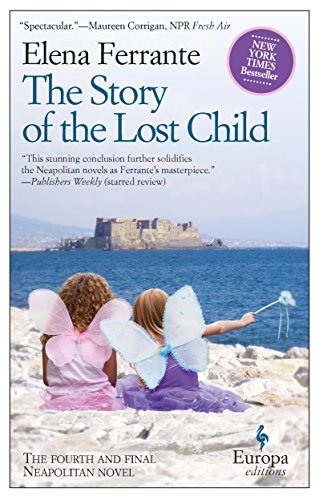 The Story of the Lost Child, Elena Ferrante’s fourth and alas, final Neapolitan Novel is a stunning conclusion to an utterly captivating, exceptional series about a lifelong friendship and modern day Naples.

Beginning in post-war Naples and concluding in the early 21st century, the Neapolitan Novels chronicle the story of the friendship of Elena Greco, the narrator and Lila Cerullo. The saga follows them from childhood to maturity and old age. The series is also an insightful examination and mini history of Naples, modern Italian history and politics, feminism, and class issues.

Elena Greco, who possesses the same first name as the pseudonymous author Elena Ferrante and who is also an author of autobiographical novels, relates how she and Lila grew up in Naples amidst poverty, violence, and corruption.

Despite her many disadvantages, the disciplined, hard-working Elena becomes well educated, a successful author and publisher, travels, and marries outside her social class; whereas the fiery Lila, despite her brilliance and many talents, achieves only a fifth grade education, holds some menial jobs, often lives in squalor, and remains in Naples.

The novels trace the many ups and downs, rivalries, tensions, similarities and differences, and strong bond between the two friends. Despite their periodic separations and rifts, Lila functions as a sort of catalyst or inspiration to Elena as a writer.

When the story opens, Elena has recently left her husband and two daughters in Florence and run off with Nino, a friend and obsession from childhood and a former lover of Lila. She eventually moves to Naples with her daughters and reconnects with Lila, who again becomes an integral part of her life.

In addition to the psychologically complex, well-developed and insightful portrait of Elena and Lila, The Story of the Lost Child also provides a rich picture of the social, cultural, and political movements taking place in Italy in the late 20th century. The novel covers politics and government corruption in Italy, and organized crime, particularly in Naples.

Ferrante is brutally realistic in depicting the day-to-day violence and hardships of the “neighborhood” in Naples. When Elena finally decides to leave Naples once and for all, she asserts: “I left Naples definitively in 1995, when everyone said that the city was reviving. But I no longer believed in resurrections. . . . It was only cosmetic, a powder of modernity applied randomly, and boastfully, to the corrupt face of the city.”

Ferrante also covers the feminist movement from a broad perspective and as it affects Lila and Elena in particular. As an educated and successful writer, Elena struggles to balance her professional interests and obligations with those of her family. When traveling to promote her books, Elena feels both guilty for leaving her daughters and a sense of satisfaction and accomplishment about her career. On one occasion when her youngest daughter becomes ill while she is away, Elena explains, “Even now that I knew about my daughter’s illness, I couldn’t get rid of the satisfaction for what I had become, the pleasure of feeling free, moving all over Italy, the pleasure of disposing of myself as if I had no past and everything were starting now.”

The Story of the Lost Child, as well as all of its predecessors in the Neapolitan series, is utterly riveting. Elena’s first-person narrative captures the reader in its intensity and pacing. She narrates in a straightforward, confessional manner that feels and leaves the reader breathless.

The translator, Ann Goldstein seems to stick closely to the original Italian in maintaining Ferrante’s long sentences. For the most part it is very effective in capturing a sense of urgency and creating a compelling narrative. At times, the comma splices and run-on sentences are jarring in English and don’t quite work. For instance in describing Lila, Elena explains, “But she escaped, it was as if she wanted to regain altitude, she started talking about computers and she did it as if to point out: You have your things, I mine.”  Despite these minor flaws, the novel is very well written and constructed, highly engaging, complex, and cohesive.

The Neapolitan Novels are epic in scope. In The Story of the Lost Child the relationship between Elena and Lila comes full circle.  The series begins and ends with Lila, the inspiration and Elena, the writer and creator of Lila. Elena self-consciously concludes her story: “I can’t believe it myself. I’ve finished this story that I thought would never end. . . . But I have to acknowledge that all these pages are mine alone. . . . Lila is not in these words. There is only what I’ve been able to put down. Unless, by imagining what she would write and how, I am no longer able to distinguish what’s mine and what’s hers.”

Though Elena Greco concludes her narrative, let’s hope that Elena Ferrante is nowhere near finished with hers.