The Story of America: Essays on Origins 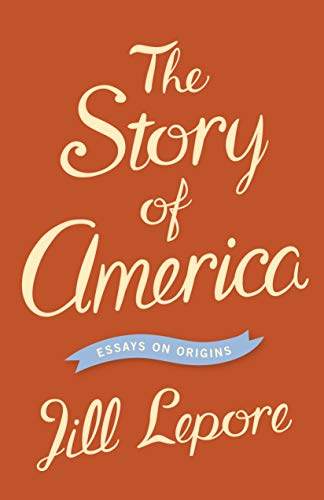 Most everyone knows—or think they know—the story of America’s beginnings. Columbus sailed from Spain in 1492; the Pilgrims arrived in Plymouth 128 years later; soon colonies were established up and down the east coast; and a new world was born. But that’s not the whole story. And whatever else you’ve read may not paint the most accurate picture.

In The Story of America, Jill Lepore takes readers on a behind-the-scenes tour of what really happened.

In this book, Ms. Lepore pulls back the curtain on their self-proclaimed exciting exploits, boastful assertions of well-deserved fame, and manipulations of the truth, warning readers, “One way to read this book, then, is as a study of the American tall tale.”

Additionally, Ms. Lepore weaves into the narrative in-depth analyses on persons with more literary acclaim and notoriety, including Charles Dickens, Ralph Ellison, Henry Wadsworth Longfellow, Edgar Allan Poe, and Harriet Beecher Stowe. She argues, “The rise of American democracy is bound up with the history of reading and writing which is one of the reasons the study of American history is inseparable from the study of American literature.”

Although these pairings may at first appear to be disharmonious, through explication, the author reveals political and social underpinnings to these writers’ works. For instance, the sing-songy and historically inaccurate “Paul Revere’s Ride” by Longfellow, which every child in grammar school is forced to memorize, subtly communicates the poet’s preoccupation with slavery. Averse to political discord, Longfellow shunned public debate on the subject, but injected portions of his abolitionist beliefs from his Poems on Slavery into this work.

Ms. Lepore also demonstrates the relationship between politics and literature through the lens of inaugural speech writing. Choosing the most appropriate word makes all the difference in how the message is conveyed and received. She rates various speeches, deeming Abraham Lincoln’s poetic and eloquent. And while brevity is preferred—Ted Sorenson told John F. Kennedy not to use a two- or three-syllable word when a one-syllable word would do—at times this strategy may backfire. Case in point: Richard Nixon’s short speech included the sentence: “The American Dream does not come to those who fall asleep.”

The publication of this book at this particular time is most fitting as the country prepares for the 2012 presidential election. Readers will surely enjoy her tutorial on the birth of the campaigning process, voting rituals and snapshots of candidate biographies.

The first one, The Life of Andrew Jackson, was coauthored in 1817 by John Reid and John Eaton and set the stage for what would become an annual ritual. While this tradition is intended to win an election for the candidate, most of these books can be dismissed, she notes. “East of piffle and west of hokum, the boy from Hope always grew up to be Man of the People,” she writes.

Additionally, Ms. Lepore relates the birth of many of what have become requisite trappings of an active political campaign, including campaign buttons and public opinion polls. It will come as no surprise that political divisiveness has been a staple of the system from its inception.

One of the most interesting and timely chapters relates to voting and how it has morphed from a practice reserved for the privileged to a more inclusive right. Ms. Lepore writes, “The United States was founded as an experiment, a staggeringly brilliant experiment, in 18th century republicanism, in which it was understood that only the wealthiest and best-educated men would vote—the only people who could be counted on to vote with the public good, and not private interest, in mind—and that they would do so publicly.”

History has obviously challenged this idea, notes Ms. Lepore. Much like many other processes, voting has undergone an evolution, sometimes slow and often corrupt.

In a persuasive argument about the seriousness of active participation in the election process, Ms. Lepore praises the voting booth as a “brilliant invention.” She writes, “What happens to the American electorate inside that tiny, curtained space is a bit like what happens when Clark Kent enters a telephone booth, takes off his glasses, and puts on his tights: we, mere citizens, become We the People.”

Mindful of her personal civic responsibility, Ms. Lepore explains that she is “. . . awed, as always, by the gravity of the moment, democracy’s sacrament, consecrated with pen and paper.”

Since before the founding fathers crafted the Constitution, the country has been beset by high taxes, unemployment, and disaffection for government officials, conditions that persist today. “History is the art of making an argument about the past by telling a story accountable to evidence,” the author writes.

The evidence in this book indicates that the country has much yet to learn from mistakes of the past. Before heading to the polling places—or if you are simply looking for a good read—have a go at this book.