Stormtrooper Families: Homosexuality and Community in the Early Nazi Movement 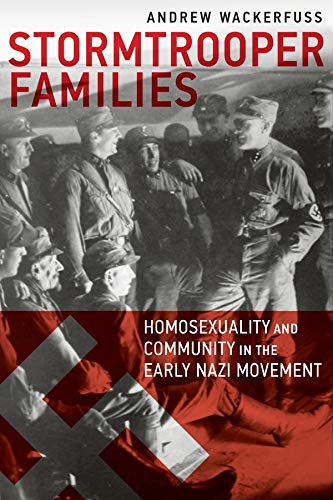 In the 1920s, Franz Tügel, a Lutheran pastor from a wealthy Hamburg merchant family, gave a sermon to a church full of SA men. His church became “a spiritual and literal bastion for the SA,” offering solace to the seasoned street fighters. How did Hamburg, a city renowned for its independence and maritime trade, become a safe harbor for the Sturmabteilung?

Andrew Wackerfuss, a historian with the United States Air Force who teaches at Georgetown University, seeks to answer this question in his new book, Stormtrooper Families: Homosexuality and Community in the Early Nazi Movement. For decades, anti-fascist ideologues have capitalized on the stereotype of the “gay Nazi.” Stormtrooper Families acts as a necessary corrective by shining a light in a neglected area of study.

Mr. Wackerfuss explores the interwoven areas of the homosocial, homoerotic, and homosexual in the male world of SA paramilitary culture. With the biography of Franz Tügel and the history of Hamburg, he extrapolates from the individual to the local to the national. The specificity provides a human face to this tumultuous, confusing, and polarizing era in German history. The Third Reich is the subject of countless books, monographs, and documentaries. Yet amid the colossal literature created interpreting what happened in Germany in those years, very few books were devoted to the sexual politics of Nazism.

The SA was one of three paramilitary organizations engaging in street fighting and violence. The other two paramilitary groups were the Reichsbanner (centrist and republican) and the Red Front Fighting Brigade (Communist). During the Weimar Republic, the Nazis characterized this time as the Kampfzeit (“time of struggle”), roughly from 1919 to 1933. Unlike later Nazi rule, the Kampfzeit saw conflict between the various paramilitary groups and conflicts within the Nazi political machine.

Hindsight makes it easy to see the Nazi regime as monolithic and unambiguously evil. Wackerfuss explores issues of homosexuality and community within the SA. Anti-fascists, when seeking to delegitimize the Nazis, caricatured them as depraved homosexuals. Wackerfuss debunks this myth by delving into primary documents like SA literature, newspapers, and diaries. While homosexuals did exist within the SA ranks, the numbers have been overestimated by political opponents and taken up by Allied historians.

Although the debunking is effective in dispelling the “gay Nazi” myth, the myth becomes complicated with Ernst Röhm, the homosexual leader of the SA. While not “out” in the conventional sense, his homosexuality was an open secret. Hitler had no problem with this homosexuality in the SA, so long as street brawls with rival paramilitaries ended in victories. To this end, Hitler was an opportunist.

The same could not be said for Heinrich Himmler, head of the SS and virulently homophobic. And unlike the SA, the SS saw itself as aristocratic, exclusive, and disciplined. Röhm saw no contradiction between his homosexuality and the radical reactionary politics of the Nazi Party. He saw it as a manly affirmation of the warrior ethos. His sexual identity and political leanings brings up important questions about homosexuality and politics.

The rivalry between the SA and the SS came to a head in 1934 with The Night of the Long Knives. After the purge, the SA lost its purpose within the Third Reich. During the Kampfzeit, the SA promoted itself as the defender of the German nation, despite actively working to subvert democracy. After the Nazis seized power, the SA found itself increasingly powerless and irrelevant. By war's end, the Nazi regime was gone, but the stereotype of the “gay Nazi” remained.

Wackerfuss explores this trope by looking at Ilsa, She Wolf of the SS and The Damned, cinematic examples of Nazisploitation in the Seventies. Today this trope is used by certain conservative Christian groups to write oppressive legislation, as seen in Uganda and Russia.

Stormtrooper Families tells a tale of contradiction, rivalry, and homophobia. When the anti-fascist opposition didn't use homophobia as a tactic to gain public support, the Nazi Party itself used it as an excuse to purge undesirables. After decades of misinformation, Stormtrooper Families offers a much-needed historical reckoning against these falsehoods, bringing lucid scholarship to a neglected area in the history of the Nazi regime.