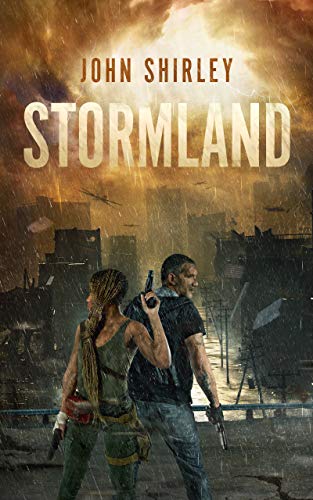 “a tightly paced, well thought out cyberpunk thriller that entices after the very first chapter.”

Climate change has ravaged the United States, creating a perpetual “perfect storm” of a hurricane centered around Charleston, North Carolina, 365 days a year. It is an area called Stormland where only the desperate and criminals dare to live. Enter Darryl Webb, a former Federal Marshal now working for a corporate agency looking for a serial killer in a country that has been taken over by corporate interests.

Once inside the cruel clutches of Stormland, Webb encounters the usual suspect pool of scumbags and criminals, but what surprises him are the kind, giving folk who have made the flooded city their home, from the half-trained doctor Gerald to the tough-as-nails Juliana. These characters flesh out what could have been just a run-of-the-mill action/adventure mystery not worth the paper it’s printed on. Instead what the reader is left with is a tightly paced, well thought-out cyberpunk thriller that entices after the very first chapter.

To be sure the characters, while good, are nothing terrific (with the notable exception of a broken man named Gerald) and can be found in almost any James Patterson novel, but what Shirley does that spellbinds is make the hurricane the central character of the story. Relentless, remorseless, and primal, this storm is given life in nearly every page, making it the true hero (or anti-hero) of the story, a wounded, feral creature whose claws are the winds and lightning its teeth. It drowns, claws, and bites at Charleston, but like a mighty warrior, the city still stands no matter how battered it is, which makes it another fascinating character in the book

Once the reader reaches the mid-point of the story, the action really starts to kick in because most of the plot exposition and buildup has been exhausted getting the story there. While the first half does shine, the second half strikes like a rattler and almost forces the reader to turn the pages to keep the story flowing. This is a mark of Shirley’s genius as a writer, hooking one with the buildup and then sucker punching with the action.

While lacking some of the biting, sarcastic humor of his other works, Shirley makes it up with his spare, no-nonsense prose like that of Edgar Rice Burroughs or Karl Edward Wagner, but with a cyberpunk twist that’s all his own. It’s a sort of cyberpunk noir mixed with a biting commentary on mankind’s greed.

Stormland is a big, sprawling read with plenty for just about everyone, a fun way to pass the time if stuck at home or on a bus.