Storm of Locusts (The Sixth World) 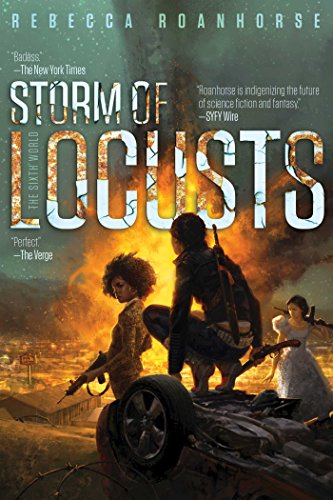 “The vivid cultural background of Roanhorse’s series comes as a breath of fresh air, providing not only a change of genre pace but a voice still heard all too rarely in speculative fiction.”

This sequel to Roanhorse’s Hugo and Nebula Award-nominated first novel, Trail of Lightning, picks up a month after the events of the first book. Once again, “monsterslayer” Maggie Hoskie is recruited to deal with a supernatural problem—but this time her hunt takes her past the Wall that protects Dinétah, the Navajo Nation, into the post-apocalyptic remnants of the southwestern United States.

As with its predecessor, the novel’s great strength lies in its indigenous roots. The boom in urban fantasy some years back glutted the market with many novels struggling to distinguish themselves from one another; the vivid cultural background of Roanhorse’s series comes as a breath of fresh air, providing not only a change of genre pace but a voice still heard all too rarely in speculative fiction. From the mundane social dynamics of the Diné characters to their mystical clan powers to the ambiguous motivations of the gods, those elements make this series stand out from others of its kind.

Other aspects of the story are less distinctive. Even the other characters in Storm of Locusts acknowledge that Maggie Hoskie is “a solid bitch” much of the time; her psychological scars and confrontational manner are common fare elsewhere in the genre. The task of healing falls more to her romantic counterpart, the medicine man Kai, who is unfortunately absent for much of this novel; the story relies on the reader’s memory of Trail of Lightning to give weight to Maggie’s tangled feelings for him.

The world beyond Dinétah likewise feels largely familiar. All the lower elevations of the United States have drowned in the climate disaster known as the “Big Water,” leaving the regions around Dinétah in the hands of powers like a theocratic Mormon Kingdom and a warlord who traffics in slaves and stolen organs. Although the characters here all escape sexual assault, the vision of our post-apocalyptic future is still one seen in many other movies and novels, where women are reduced to roles like “breeder” and only the ruthless prevail.

Maggie’s target this time around is the White Locust, a cult leader who grafts artificial wings onto his followers and stockpiles explosives for some ominous purpose. The limitations of a first-person point of view begin to bind a little too tightly here: Because Maggie doesn’t reach the White Locust’s stronghold until nearly three quarters of the way through the novel, the reader gets relatively little opportunity to understand the cult, much less the man himself. Some information comes in via other channels, but a second point of view would have allowed for a more thorough exploration of the antagonist, and therefore greater impact when Maggie confronts him at last.

Storm of Locusts does give the reader a little more breathing room than Trail of Lightning did. The plot still races from an abandoned White Locust outpost to the Wall of Dinétah to the badlands outside, but this time around Maggie has a few more opportunities for quiet moments with her friends and herself. These not only provide a welcome respite that gives more weight to the tense confrontations, but are evidence of growth on Maggie’s part.

This novel also begins to open up the possibility of positive change, not just in Maggie and the characters around her, but in the world at large, healing some of the damage left by the Big Water. The title of the series, The Sixth World, alludes to the sacred Navajo creation story, wherein the ancestors of humanity climbed upward through a series of earlier worlds to reach our own reality, the Fifth World. Whether the setting of Roanhorse’s novels is itself the Sixth World, or whether the characters will ultimately depart the post-apocalyptic wasteland for a better place remains to be seen.