The Stories You Tell: A Mystery (Roxane Weary) 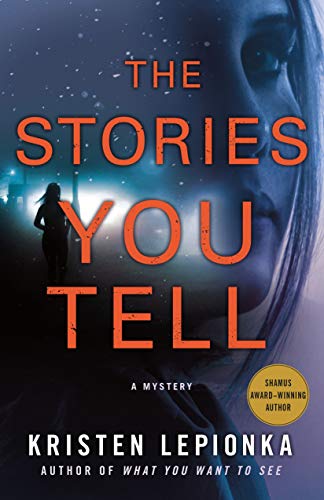 “Lepionka, a Shamus Award-winning and Anthony and Macavity Award-nominated author, shows us that she not only has top-notch writing chops, she has longevity, with Roxane Weary destined to find her place alongside crime fiction’s best private eyes.”

Roxane Weary, private eye, is already awake when she realizes a call has come through on her cell and recognizes her brother’s number. News is never good at three in the morning, and Roxane’s mind skips back to the last time she got a call in the middle of the night, informing her of her father’s death.

She returns her brother’s call wondering what tragedy might have occurred this time and what impact it will have on her.

Roxane goes on to learn an acquaintance of her brother showed up at his apartment late at night, used his phone, then scurried back out into the dark and vanished.

Thus begins three important threads in Lepionka’s twisty tale of relationships, crime, and violence. Interweaving the personal with the professional, Roxane sets out to solve the disappearance of Addison Stowe, untangle her brother’s legal problems, and continue to come to terms with her own father’s death.

As with many female private eyes, Roxane is smart, outspoken, and funny. Her relationships are messy, and she needs to resolve the issues from her own history. While these aren’t new tropes, Lepionka presents them in a new way, building on the genre, making it both contemporary and familiar.

The series is set in Ohio, a state we don't often see represented in crime fiction. It’s also a location that can be used to raise physical obstacles for Roxane to navigate. “The snow there was deep—at least eight inches, thanks to Ohio’s semiweekly winter storms—and muddled with footprints, lots of them.”

The intimate relationships Roxane negotiates are with both women and men. Roxane’s fluid sexuality creates a more complex character than a straight character might.

In addition to dealing with the personal, the professional hurdles Roxane faces push her into a more and more complex story, with multiple, apparently disparate threads, all neatly tied up at the end.

Lepionka’s tone straddles the line between the seriousness of events and her protagonist’s humorous voice. Roxane’s wry observations about the world enhance the tense story with moments of levity.

“Shane Resnik was, as promised, a weasely-looking guy with bleached hair and a scruffy goatee and the general vibe of someone who always yells ‘Play “Free Bird”’ at live bands to be funny.”

This balances out the rising anxiety that Roxane feels at Addison’s disappearance. “I tried to put myself in Addison’s shoes: on the sidewalk in front of her job, upset about something.”

She recognizes that whatever scared her brother’s acquaintance might have also put Addison in serious jeopardy.

“An emergency. An I have to get off this street immediately type of emergency.”

That emergency turns Roxane’s brother into a suspect in Addison’s disappearance and builds a whole new set of complications for Roxane.

Lepionka integrates social media, and the stories people tell on various platforms, into the puzzle. The Internet provides various new way to lie, through fabrication or omission, about who we are. From texts to emails to social media posts, we can hide behind profiles and computer screens.

We can shave years off our age, pounds off our waistlines, and make every challenge we face appear a success.

The Internet is also a place where a killer can hide, with various new ways to find their victims.

Although The Stories You Tell is the third in the series, readers can begin with this book as a standalone. Lepionka references past events but doesn’t dwell in them.

Lepionka, a Shamus Award-winning and Anthony and Macavity Award-nominated author, shows us that she not only has top-notch writing chops, she has longevity, with Roxane Weary destined to find her place alongside crime fiction’s best private eyes.