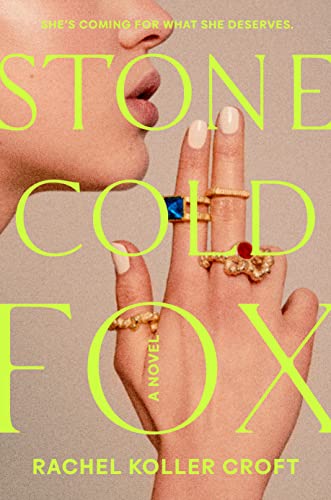 A perfect ten, Bea is a woman who knows her own worth and is willing to employ her beauty to achieve her ultimate goal—marrying not just a rich man, but a mega-millionaire. And she’s found her mark, the sweet, seemingly uncomplicated Collin Case. Sure he’s a little dull, but big bucks are big bucks, and Bea has been in the game long enough that she’s getting tired of being the most beautiful woman in the room—it’s a lot of work to keep up, to ceaselessly laugh at stupid jokes, pretend the men she dates are the greatest lovers, the most scintillating, and as wonderful as they think they are.

“By the time I happened upon Collin Case,” she tells readers, “I had already dated more than my fair share of New York ‘somebodies’ with middling personalities and big-enough bank accounts. They were relatively easy to find when you looked like me. I spent hundreds of my hard-earned dollars on fresh highlights every four to six weeks. I mastered an authentic feminine titter for jokes that weren’t remotely amusing as I grazed nearly non-existent biceps with my perfectly manicured hands, an almond shape on each nail. And I regularly choked down liquid meals with organic ingredients on the regular to stave off a bloated belly and thighs that touch. I did everything I had observed as a child because ultimately it works. I watched her do it for years. But what I learned rather quickly is that dating men in that particular orbit is no picnic at all. “

But snagging Collin and getting a big sparkling diamond ring isn’t the hard part of her matrimonial quest. It’s getting his parents, the elite, snobbish, and oh-so-superior heirs to the Case family fortune, to approve of her. And then there’s the added roadblock, Collin’s longtime friend Gale. No match in the looks department, Gale has had a long-time crush on Collin and, intellectually a match for Bea, she’s determined to deep-six the couple’s wedding plans.

If Bea were an ordinary gold digger, it might be easy to root for Gale. But Bea was the pawn of her avaricious mother who married men and then discarded them, leaving Bea unsettled, sad, and afraid to trust. Everything is a challenging game to Bea, one that must be won. She’s afraid to forge connections, her guard is always up. She can’t help but analyze every nuance of a relationship in stark terms, planning her next parry and thrust. As she and Gale play their cat and mouse games, with Gale slowly unraveling the false identity and façade that Bea has built to protect her past—and it’s a doozy—from being discovered, Bea begins to realize she might lose Collin and her carefully created identity. She has to make choices. How much is it worth to protect what she has and hopes to have?