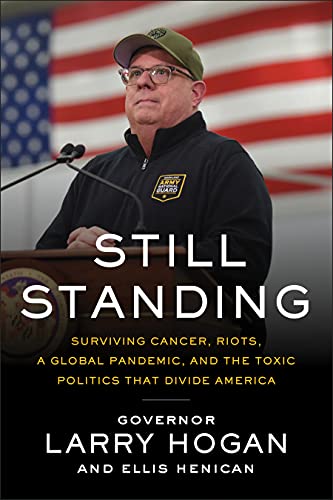 “Regardless of one’s political beliefs, Still Standing is a good read with a fast pace; it’s informative, at times humorous, and tells the story of a man who is willing to recognize his own shortcomings.”

Reading Still Standing by Governor Larry Hogan of Maryland is sort of like watching Mr. Smith Goes to Washington. Regardless of one’s political leanings, the reader quietly cheers for Governor Hogan.

Hogan has presented his story in six parts, and these parts each help the reader to follow, logically and chronologically, how his life has unfolded to bring him to this place in the world. He discusses his family history, his beliefs, and his goals in easy to understand language.

In his introduction, Hogan relates how he discovered that cancer was ravaging his body—it’s an opening that is gripping and makes the reader want to turn the page to learn more about this man.

In Part I, “Learning” he provides insight into what it was like growing up in Maryland; the emotional upheaval of his parents’ divorce; his goal to not favor one parent over the other, but to keep what’s left of his family ties knotted tightly. It is here that he talks about his father’s political ambitions and how he instilled in Larry Jr., the importance of crossing the aisle when he said, “We’ll never win if all we get are Republicans. . . . We need the cross-overs. They’re the key.” This was a lesson that Hogan Jr. took to heart and retains to this day.

One of the highlights of Part I, and a theme that runs through the entire book, is his falling in love with Yumi, his wife. His comments about their relationship, as well as those with her daughters, who became his daughters, are genuine and warm.

In Part II, “Running” Hogan goes into great detail outlining his own political activities when he found himself running for governor in 2014—a race he was given no chance of winning. But “Fed Up” was the feeling racing around Maryland, and Hogan ran on his small-businessman history and his understanding about winning with cross-overs.

In this part, he talks about the many taxes that burdened Marylanders, and puts special emphasis on then Governor Martin O’Malley’s “rain tax” and the impact it had on the citizens. It did not take long for his numbers to start going up. It should be noted here that as with any political bio, the bad guy is always the other party, and Hogan does take advantage of slashing the Democrat(s) and honoring the Republican(s). That is not a criticism of his approach, it is only an observation, but it does spill throughout the book in the sections where he talks about his political races.

Larry Hogan, Jr., won in a landslide victory, stunning the pundits and projectors of both parties. As he assumes leadership—a Republican in a deep blue Democratic state, he reaches out to everyone. “Building a team wasn’t easy, but we were putting together a strong one. This was the most bipartisan, most diverse, and most inclusive cabinet ever assembled in Maryland.”

In Part III, “Leading” Hogan discusses his trial by fire as he deals with the Baltimore riots just a few months into his tenure. The reality of this situation was made clear to him during this time. “It was organized chaos. And standing on top of all of it was me.”

In part IV, “Healing” he goes into great detail about his cancer diagnosis “stage three, possibly stage four” and how he managed the state during the worst of the treatments. Through several chapters, Hogan reveals the many steps that he went through and yet never contemplated giving up the responsibilities that the Maryland voters gave to him when they elected him. This period presented him with many challenges both politically and personally—losing his older sister; losing his favorite pet; seeing the cancer go into remission. He talks about these moments poignantly.

In Part V, “Uniting” the reader gets to meet Donald J. Trump, and Hogan is very clear throughout the rest of this part and Part VI, that his politics, while remaining Republican, differed considerably with the president’s. Hogan’s achievements as governor left Trump in the dust, and yet Trump was the president, and everything changed.

Here Hogan talks about his run for reelection, and although he had high marks throughout Maryland, he was haunted by the fact that only one Republican governor had been elected for a second term and that was about five decades earlier. And yet he ran on the same beliefs that he had run on before, and that he governed with: “I was the man in the middle who could talk sense to both sides. I didn’t care what was a so-called ‘Republican idea’ or ‘Democratic idea.’ I simply cared about what was a good idea.”

While the book is a fast-paced, well written book, it can easily be said that he saved the best for last. In Part VI: “Saving Lives” Hogan discusses in detail the effect of dealing with the Corona virus on Maryland, the United States, and the entire world. He instantly recognized the challenge that was arriving on America’s shores and he knew he was up to it because of those challenges he had faced throughout his life; his parents divorce, his inspiring first run for governor, the Baltimore riots, his cancer treatments, and his run for re-election and winning against all odds. “The riots, my cancer—all the lessons from my past challenges would be guiding me through this one.

The most interesting thing about Still Standing is the way he brings the reader into his personal thoughts about his life and how it did, and continues, to unfold. It should be noted, also, that Hogan is very generous about recognizing his staff—the team that rode with him through the tough times as well as the good times.

Regardless of one’s political beliefs, Still Standing is a good read with a fast pace; it’s informative, at times humorous, and tells the story of a man who is willing to recognize his own shortcomings.

And so, he brings the story of his life to where the country, and especially Maryland is today. He leaves open any thoughts about Washington DC in 2024 . . . can Mr. Smith be far behind?