Still Life with Two Dead Peacocks and a Girl: Poems 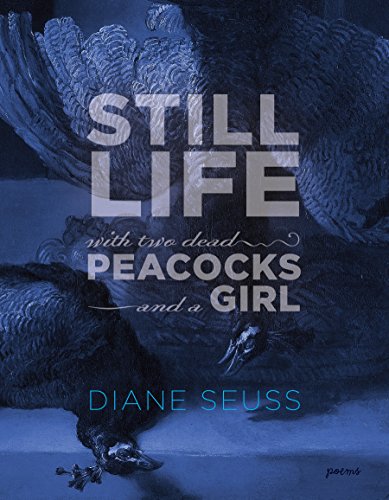 In Rembrandt’s painting, Still Life with Two Dead Peacocks and a Girl, a child leans in the window, smiling, looking at everything the rich world has to offer her, including a bowl of fruit, and the two peacocks, one hanging upside down and one laid out on a kitchen table, ready for butchering. The only genuinely bright spot in the painting is the smear of blood running from underneath the second bird and dripping off the table. From our post-modern perspective the painting assumes its meaning as a comment on the very act of looking, on the making of art.

In the title poem to Diane Seuss’s new collection, Still Life with Two Dead Peacocks and a Girl, the poet imagines that the child has come to the window sill looking for pie to steal or sample. Instead she is confronted with dead birds!

That sense of disappointed expectations is one of the themes throughout this brilliant collection, as is the girl’s imagined response: “Why not pluck a feather?/Why lean against the gold house of the rich and stare at the bird’s dead eye?” The girl, the viewer, the poet is outside the house of the rich, but she knows what to do: “The girl must pull the heavy bird into the night and run off with it./Build a fire on the riverbank. Tear away the beautiful feathers./Suck scorched, tough, dark meat off of hollow bones. Look at her, ready to reach.” Strength rises from that disappointment. There is ritual here, and it is sometimes violent and often out at the very edge of the emotional scale. The poem concludes with a Rilkean twist: “Art, useless as tits on a boar.”

In a note for the group of free sonnets this poem is part of, the poet tells us she learned this long 17-syllable line from Allen Ginsberg and his “American Sentences.” Ginsberg’s long line fits easily into the long lines that intrigue Seuss. In this new book, and her previous one, Four-Legged Girl, runner-up for the Pulitzer Prize a couple of years ago, Seuss uses exuberant long lines to contain her wide-ranging imagination. Seuss riots in language, but there is not any easy adjectival or adverbial excess here. Rather she spins her syntactically rich sentences and her catalogues that try to capture something of the flow of the images and metaphors that must constantly be swimming through this poet’s head.

As the Rembrandt allusion in the title suggests, many of these poems are framed by paintings, although there is not an academic ekphrastic prompt in Seuss’ use of fine art. The poet’s appreciation of high art—usually considered a medium far removed from the poor, working class roots that Seuss writes about with devastating clarity—is hard earned. Seuss is always the girl at the window looking in at the still-life, and the poet relishes that role.

The book has several sequences of poems, and one of the most intriguing is a group of prose pieces after great American painters of the 20th century collected under the overarching title “Walmart Parking Lot.” This poet does not let her readers forget where they are, even as she writes pieces after Pollack, Rothko, O’Keeffe and others.

The Pollack piece gets the feel of the painting but in that Midwestern parking lot: “Frozen Coke splatter, and the disembodied sadness of the one who accidentally dropped it. Vomit-arc. Winding loops of coal tar sealant. Sparrows, too, have left their mark.”

In “Mark Rothko” the poor girl from southwestern Michigan takes the beat-up South Shore Railroad into Chicago to go to the museum that she will later write about. “The art, we saw, was good,” she writes. “We swallowed it down hungrily, without filter, like drinking water straight from the creek.” There’s a lot in that sentence about Seuss and the passions that motivate her art. The poet has a physical response to the art, and ingests it without cleaning it, without being told how to “consume” it, the way she would drink from the dirty creek behind her rural house. It’s a beautiful image of the desperate need for art that cuts across class in America. In its own way this is a cry of hope.

At the end of the Rothko piece the poet takes the patterns of color from the museum back to her place: “We rode the swaying train home at sunset, the smokestacks of Gary shooting flames into a sky already changing orange. The city had been a dream. Home, too, a dream, black above, silver-gray below, floodlit by buzzing security lights.”