Stick Together (The Awkward Squad) 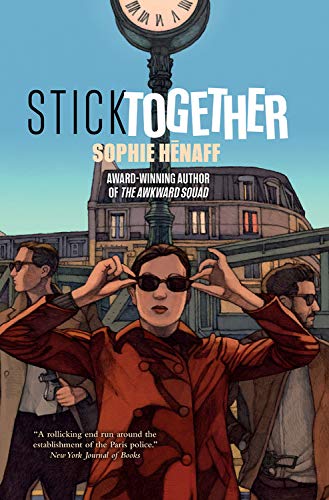 "Henaff creates the most eccentric, most humorous characters who also reveal an unexpected pathos."

Commissaire Anne Capstan and her Merry Band of Misfits return in a rollicking end-run around the establishment of the Paris Police, who only wish that Capstan and her squad would quietly peruse cold cases and leave the real policing to the professionals who aren’t, well, misfits.

Once a rising star in the police department Capstan is suspended after an officer involved shooting (the murdered person richly deserved it), her husband leaves her “citing a whole load of convenient, moralistic prattle,” and she spends months wondering if her career is over. It isn’t, but her new assignment is not only the bottom rung of policing, it comes with a squad of losers the department cannot fire.

Capstan and her squad are banished to an old building in the middle of Paris, filled with broken rejects for furniture, an ancient computer, peeling wallpaper, and boxes of cases so cold, they practically have frost. Despite their handicaps, the squad solves a series of old murders unfortunately involving one of the establishment officers, a fact that only makes them more distrusted and despised.  If you can’t trust one of your own not to arrest you, who can you trust?

As Christmas approaches the squad is physically in a more comfortable situation thanks to Capitaine Rosiere, a wealthy mystery writer with her own TV series. The fact that her characters are thinly disguised parodies of her comrades in the police earned her a berth in Capstan’s squad.

Rosiere “had taken over the refurbishments, exercising decreasing levels of restraint.” Besides new desks, a couch, comfortable chairs, new paint and wallpaper, a giant Christmas tree in honor of the season, and a snooker table “complete with fringed rectangular lampshade, four leather armchairs, a cue rack and a magnificent oak-topped bar with a set of matching stools,” furnished the commissariat.

When Directeur Buron calls Capstan, her squad is comfortably lounging in the office as they usually are. Rosiere is arguing with Capitaine Merlot, “a well-connected but booze-addled freemason,” while Commandant Lebreton, beautifully groomed as always, reads the paper. Lebreton ran afoul of the police prejudice when he announced he was gay; soon after “he was fast-tracked to Buron’s custom-made dustbin.”

Also among the squad are Lieutenant Evrard, “dismissed from the gambling task force after developing a certain weakness for blackjack;” Lieutenant Torrez, infamous for bringing bad luck and thus avoided when possible; Lieutenant Orsini  who clips articles about murders and hides them in a file in his locked desk; Lieutenant Dax, who takes everything literally after an injury; and Brigadier Lewitz, a demon behind the wheel who wrecked the squad’s only functioning police car.

Recent additions to the squad are Rata, a brown rat that Merlot is training for active duty sniffing drugs and gunpowder; and D’Artagnan, real name Henri Saint-Lo, recently released from the psych ward. “His nickname stemmed from his belief that he had started his career as a musketeer to the king, making him immortal.”

With a squad of such losers no one expects Capstan to actually solve any crimes, and no cases are assigned to her and her misfits. Until now. “Why did you invite us to the party?”

Capstan doesn’t like the answer. A top-drawer police officer is murdered; any leads that don’t fit the pre-conceived narrative of the investigative branches of Crim and B.R.I. will be ignored.

“Monsieur le Directeur, please tell me you’re not asking us to investigate another inside job. Other officers have got their knives out for us as it is.”

That is exactly what Monsieur le Directeur is asking, but it seems to Capstan that he is enlisting the squad on the sly which she doesn’t understand until she sees the body, then everything becomes clear. The murder victim is Serge Rufus, her ex-father-in-law, a retired Commissaire and, in Capstan’s opinion, if not corrupt, at least very shady.

It is up to Capstan to inform her ex-husband, Paul, the gorgeous former lead singer of a band, and the man she still loves, of his father’s murder. Paul does not break down; in fact he shows little emotion. He and his father had not spoken for several years. Serge Rufus had little respect for his son’s show business career.

Among the oddities of the murder is the fact that Serge Rufus’ obituary appears before his death. He knew someone was coming for him, but why? A computer search turns up another man murdered after his obituary appears prior to his death, but there is seemingly no commonality between the two victims. Then a third victim appears, this one with a connection to an armed robbery committed years before. Only one of the robbers went to prison—and now he is out.

The other two squads investigating Serge’s murder withhold information, forcing Capstan and her quirky squad to go behind their backs, sometimes using questionable methods. They flush out the paroled armed robber, but the squad is always just a few seconds late, allowing him to escape and the squad to create chaos on the street as only the Merry Band can.

Sophie Henaff pulls all the threads together in a very clever way, including the hilarious debut of Rata, the police rat. The solution is unexpected, but perfectly logical once one knows all the facts, and the ending is both tender and funny.

Henaff creates the most eccentric, most humorous characters who also reveal an unexpected pathos. Evard regrets the unhappiness her gambling causes her parents; Lebreton is still grieving over the death of his husband; Rosiere hides a deep sadness because her only son will not come home for Christmas; and Anne Capstan mourns the end of her marriage and a truth she can no longer hide.

Stick Together is an absolutely wonderful book equal to any of Donald Westbrook’s.