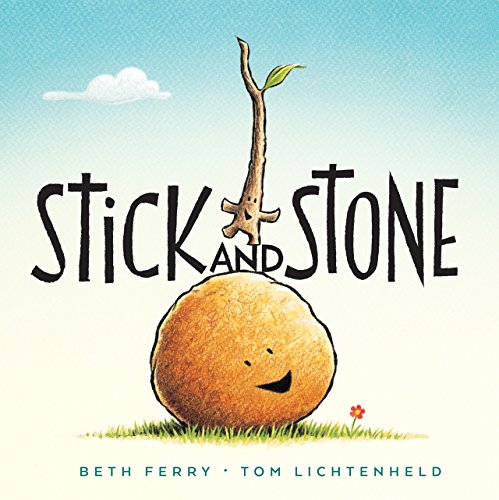 “in the final analysis, it’s the illustrations that rock; the story is not likely to stick with you.”

It’s unsurprising that bestselling illustrator Tom Lichtenheld (Duck! Rabbit!) was once an award-winning art director at an advertising agency. His attractively designed covers are, like the best ads, highly effective hooks.

The pleasingly uncluttered cover of Stick and Stone is no exception. Our two adorable protagonists, shaded with muted but warm colors, smile at us irresistibly on a patch of grass under a blue sky. Debut author Beth Ferry’s clever title seals the deal.

But the book begins during darker times. Stick and Stone are sad and alone. The rhyming text is effectively sparse, and the colors are dialed down. And there’s a bully, Pinecone, who makes fun of Stone at the playground.

Luckily, Stick is on the scene. He tells Pinecone to “vanish!” and his “word does the trick.” He does this because, well, that’s what sticks do—stick up for people. Which is amusing.

But author Ferry contorts slightly to pivot the proceedings from rescue to buddy story by having Stick explain that sticking up for people is also what friends do—despite the fact that he and Stone just met. Did he assume Stone had no friends because he was playing alone? Because he didn’t stick up for himself? One also wonders why a brave and generous soul like Stick would be sad and alone.

For better or worse, most readers might be too delighted by Lichtenheld’s artwork to ask such questions. The illustrations depicting how Stick and Stone’s friendship grows as “They wander, explore. Laze by the shore” are endearing. The shapes are large and deceptively simple, the colors bright, and the smiles winning.

And things get dramatic when disaster strikes. A “loud hurricane” separates the fast friends, and Stone is left searching day and night with “No Stick in sight.” He eventually finds his friend stuck in a puddle, which provides the perfect opportunity for the former rescuee to become the rescuer with a well-placed Kersploosh! But while this role reversal provides some symmetry, the rescue, because it doesn’t require courage, falls a bit flat. Still, Stick and Stone are reunited, and we are told that best friendship rocks. Which is also amusing.

It would be unfair to call the book didactic, but it’s not likely to win any awards for subtlety, either. And because there is a loose end, Ferry felt compelled to have Pinecone apologize for “needling” Stone—and so the story ends on another funny but forced note.

As enjoyable as Stick and Stone is, it’s impossible to read without thinking of My Friend Rabbit, a book that depicts friendship with not a whit of contrivance and a level of sophistication that gives a bit more credit to the reader (and, yes, readers from pre-school to third grade can be given credit).

Still and all, you will be sold on Stick and Stone because its strengths outweigh its weaknesses, and its messages about friendship and bullying are conveyed charmingly enough. But in the final analysis, it’s the illustrations that rock; the story is not likely to stick with you.