Stephen Jones & the Accent of Fashion 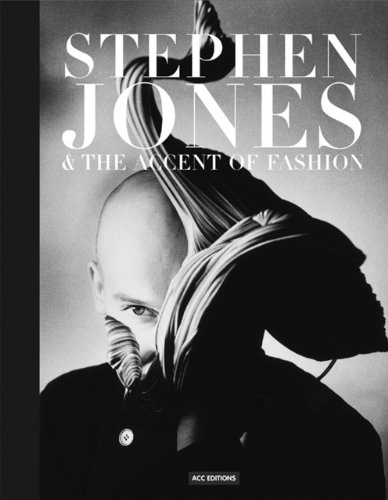 Unlike most “fashion designer driven” volumes, this book actually speaks in the designer’s voice as well as from the perspectives of other celebrated figures from within the fashion community.

What sets apart Stephen Jones and the Accent of Fashion from its peer publications is that everyone who has contributed, including Mr. Jones, tells a story and each contributor is not just reciting some treatise on a given subject. The result is that each chapter is offered to us in exquisitely unpretentious language without any hint of drabness or mundanity.

Stephen Jones is filled with lavish photographs spanning Mr. Jones’ entire career, starting in 1980 in London when he first enrolled in what is now known as Central Saint Martin’s, the student design epicenter of that city. From his early association with Boy George, Spandau Ballet, Kim Bowen, and the general “Punk Movement” sweeping London, Mr. London proved himself an innate artist, a talented designer, a willing collaborator, and one of the 21st century’s fashion geniuses.

Mr. Jones takes great pains to impress upon us that his hats are but punctuations points to a sentence—a sentence created by the designers he works with as well as his own that he creates when starting a new collection. Mr. Jones believes each style, each collection, and each “marriage of talents” requires a storyline, a historical reference, or a jumping off point. Without one of these elements, he cannot make his magic.

And Mr. Jones’ body of work is unrivaled in its originality. There is some germ of comparison that can be made to the millinery produced by Elsa Schiaparelli during the first half of the 20th century in Paris. Just as she had been influenced by her friendships with fine artists of the time, Mr. Jones is influenced by artists of every type—not excluding those in the fashion industry. Nowhere is this more evident as when Mr. Jones and John Galliano confer for each new Dior collection; these two immensely talented “artists” allow each other to contribute without reservation or hesitation to create a finished unified vision. Mr. Galliano cedes to Mr. Jones creations and ideas as he clearly states that no one can “tilt a hat” quite like Stephen Jones. It’s that 45-degree angle that is the finishing touch when showing the “exclamation point at the end of the sentence.” What also sets him apart from the pack is that the hats are sculptural and sometimes figurative in the literal sense . . . they are not just aesthetic pieces of adornment.

Make this book a gift to anyone who has even the faintest interest in either art or fashion, and they will be enthralled when they see the artistry that can be delivered when an artist is unfettered in his vision and creativity—and when said artist has a limitless vocabulary for the expression of their talent.