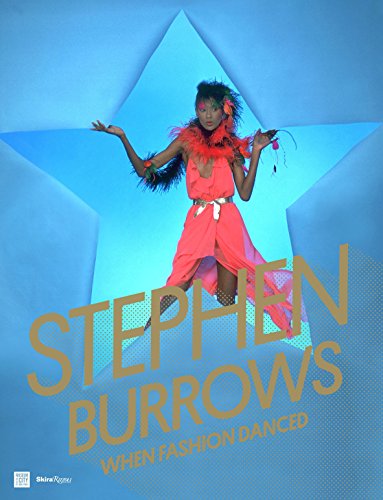 There can be no greater compliment to a designer than to have a museum mount an exhibition of his or her work. So Mr. Burrows should be extraordinarily gratified by this amazing moment celebrating his designs. (The exhibit is at the Museum of the City of New York from release date of this book until July 28, 2013.)

Stephen Burrows: When Fashion Danced cannot really serve as a catalog for the exhibition without having actual photos of the actual show, but it does offer up the how and why of Mr. Burrow’s meteoric rise to the top tier of fashion during this particularly heady era.

Mr. Burrows is remembered by various luminaries of the fashion and literary world and interestingly by some who never knew him at the height of his talent, which strikes one as slightly odd. Nevertheless, Mr. Burrows is lauded for the revolution he created at the time and justifiably so—except the revolution was partially due to a confluence of events that provided the enabling for such a moment in fashion; Henri Bendel was the “It” store with the newest and latest and greatest cutting edge designers, disco was peaking, sexual freedom and being gay were embraced as was racial equality and a preponderance of 20- and 30-somethings were all looking for a good time and something new to wear. Going out became a nightly event rather than a weekend amusement.

A glaring inconsistency is when Bendel’s is described as a Fifth Avenue store which it wasn’t until 1990 when it moved from its original location on West 57th Street.

The take away on the book is simply that it is a love letter to a designer who had his moment a long time ago and has finally been recognized for the contribution he made to the continuum of fashion history.

As any fashionphile will remind you, a designer is only as good as his or her last collection. Stephen Burrows: When Fashion Danced provides an opportunity for the seasoned reader to trip down memory lane and for the neophyte fashionsita to discover a once great talent.