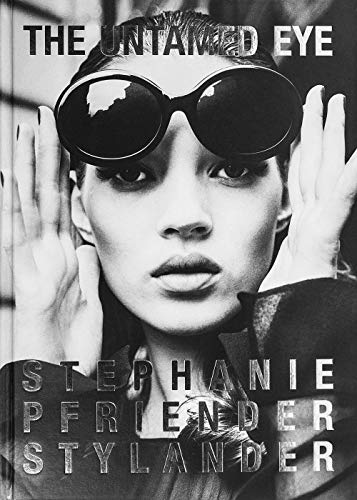 If ever there was or is a book that presents a conundrum for a reviewer, this is it; Stephanie Pfriender Stylander: The Untamed Eye is a mystery in so many ways.

If one was accused of pointing out that  there is a paucity of text in this pictorial chronicle, that person might be considered THE absolute master of understatement as there is quite literally NO TEXT that exposes the story of this photographer or why this book has a purpose. If not for the press release, (which no reader will get) this reviewer would have remained in the dark about the identity of this person as well as being forced to Google the name to discover anything about her. The most you get is that you can surmise from the cover and content is that she is a photographer of some note.

Even the images are presented with no accompanying text despite their potency and power, leaving you with the enigma of their origins. This is a case where context, even in its barest sense, might have really explained the raison d’être for the book.

There is an index at the very end of the book that very tersely tells you where the images originally appeared, when they appeared, and possibly the model’s name, but this should have been included on the same page as each image. The equivalency would be a travel brochure with absolutely no text. Undeniably, photo centric books should not be heavily laden with text, but even those that deal with the megastars of photography and design provide the reader with some sort of environment or setting, let alone an introduction or a foreword. Instead there is some cryptic set of questions about the meaning of life at the end of the book which was nothing short of unnecessary.

Yes, the photos are strong and full of strength, but so much is lost when you hunger for their story. This stymied reader had never heard of this photographer, which presented its own set of problems from the onset. One might suppose that if you don’t wish to actually sell your book but to simply say there is a book about your work, then here is a fine example of that scenario.

There is always an excitement about discovering someone’s talent, but that can be quickly dashed when the reader is left hanging until the very end to accidentally locate the source for all the photographs; that is,  if they even get that far.