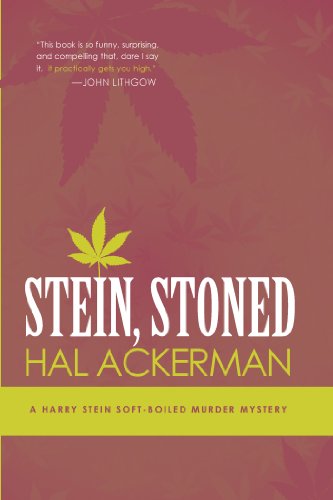 Chapter One is a prologue. David Goodpasture grows the perfect marijuana plants, hidden in the depths of his luxurious home. He gives the product to elderly people in a hospice. One day, walking into his drying area, Goodpasture discovers his entire crop missing.

Enter Harry Stein in Chapter Two. It’s Stein’s fiftieth birthday in the year 2000. Once an icon of sixties counterculture, Stein ranked with stars like Ken Kesey, Jimi Hendrix, Timothy Leary, and Janice Joplin. His expertise, besides ridiculing authority, was the cultivation of marijuana. He even wrote a seminal guide called Smoke This Book.

“[H]e first ventured west in the nineteen-seventies a wild-spirited merry-prankster agent-provocateur . . .” But Stein lives a dull life now. A divorce seven years ago gave him shared custody of his daughter Angie—but only if he engaged in no “actions deleterious to the well being of the child.” So Stein—the 1960s drug guru—cut off his ponytail and stopped smoking weed completely. He even traded in his old VW bus for a Camry.

When he visits his old sixties cohort, Winston Frenneau, for help on the investigation, his buddy mourns Stein’s lost glory and “suicide of the soul.”

“You meant something to people . . . . People bought into your shit. They like to think they can de-pants the president.”
“You sold the [VW] bus, Harry”
“It was an icon, man You don’t sell an icon.”
“Now I don’t know who the fuck you are.”

Stein’s “suicide of the soul” includes his job as an insurance investigator. He shows up at a warehouse each day to tally a new inventory of shampoo bottles. One day 1,000 bottles are missing. Stein could care less. “It’s shampoo. Who gives a shit?”

As Stein begins his search for the bottles, Goodpasture appears, pleading with Stein to find the stolen marijuana. Stein’s weed expertise makes him the ideal PI for the case. But Stein says no; he doesn’t want to be involved in anything that would endanger his custody of Angie.

Soon after, there’s a murder that might have been avoided if Stein had accepted the case. The murder, in fact, connects the shampoo and marijuana thefts.

Stein gets serious. He’s now determined to track down the murderer as well as the missing weed and shampoo bottles. And maybe even get back to being the hero he used to be. With a bit of irony, Ackerman writes, “Stein the hippie was dead. Long live Stein the warrior.”

The murder-weed-shampoo investigation leads Stein as far away as Amsterdam, where he engages in a chase as dark and mysterious as a scene from Orson Welles’s film noir, The Third Man.

Besides Amsterdam and its mysteries, the investigation leads Stein to nearby places, such as the shampoo factory with a sudsy mixing vat the size of a small lake—a perfect place for a drowning. . . .

In Stein, Stoned, Ackerman gives readers a mystery story that begins low-key and becomes unexpectedly more gripping. In fact, by the end it’s a downright thriller.

But in addition to an engaging mystery, Ackerman provides cultural history of the 1960s, social satire, and humor—including a send-up of pious, affluent L.A. anti-automobile activists whose revered guest speaker arrives in a limousine. Stein observes the group’s “hierarchy of purity,” which is topped by, “[B]rothers originally from Siberia who had pogo-sticked from Santa Monica the previous night for the talk on herbal colon cleansing and had just stayed on.”

Stein, Stoned even provides some postmodernist self-reflexivity (don’t laugh) through the character of Stein’s beautiful neighbor Penelope Kim, involved in everything L.A.-hip and New Age, who is writing a book about a detective named Klein, patterned after Stein. But as Penelope watches Stein’s own mystery unfold, she says: “Reality so kicks fiction’s ass.”

Many readers will love Stein, Stoned. Harry Stein is a nice change of pace from the tough-guy, bourbon-drinking, lone-wolf detectives who pack heat and who themselves kick ass.

And for anyone who lived the 1960s counterculture (or whose parents did), Stein, Stoned is a must-read. In fact, most mystery readers (maybe not ones with strong feelings against marijuana or 1960s hippies) would likely enjoy this funny, light-hearted thriller.